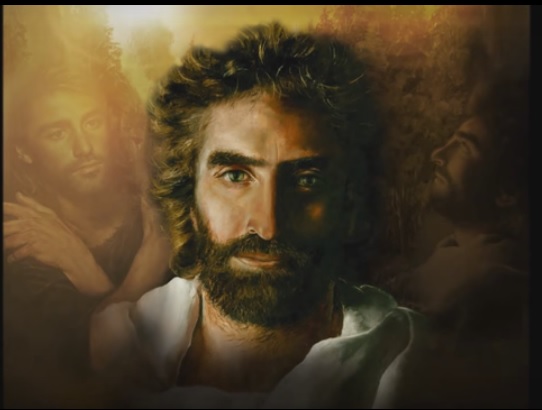 This is what the author believes to be the real image of Jesus Christ, as an 8 year old girl from Italy, Akiane Lithuania, was given a Holy Vision. The girl found an Italian carpenter who looked the most like the Person in her vision and painted him, although he rejected the idea, saying he wasn’t worthy.

However, in the USA, a 4 year old boy, Colton Burpo, died and went to heaven for a short time before being sent back to earth. His father showed him dozens of pictures and searched the internet trying to find an image of Whom his son saw in heaven.

One day, as Colton walked by the computer screen and saw the photo above, he said, “That’s Him,” although he didn’t know anything about the girl who painted the picture.

People have been trying to get an idea of what God looks like for many years. Jesus Christ’s image was supposedly embedded in the “Shroud of Turin,” as well as in the “Veil of Veronica.” http://www.newworldencyclopedia.org/entry/Veil_of_Veronica

The Veil of Veronica is said to have an imprint of the face of Jesus, imprinted on the cloth when Saint Veronica wiped the sweat of his face on the way to Calvary

He also told his mother about meeting his “other” sister in heaven, but she protested that he only had one sister who was still alive. When she asked what her name was, he said she told him she didn’t have a name because she had died in the womb.

Colton’s parents had never revealed the fact that they had lost a baby and didn’t even know its sex, but Colton told them she said she was waiting for them and wanted to hug him over and over.

IF YOU ENJOY THIS SITE PLEASE TELL OTHERS ABOUT US…SHARING IS CARING
HAVE A COMMENT? LEAVE YOUR COMMENT BELOW
The views expressed and information presented in this article are solely those of the writer and their sources and do not necessarily reflect the views of others at BendedReality – If you wish to republish this article please include full attribution to this site (BENDEDREALITY.COM) and the author of the article – If you are interested in being a guest writer for our site, please CONTACT US and let us know, we would be glad to consider you for a guest writing opportunity (EXPERIENCE NOT MANDATORY).