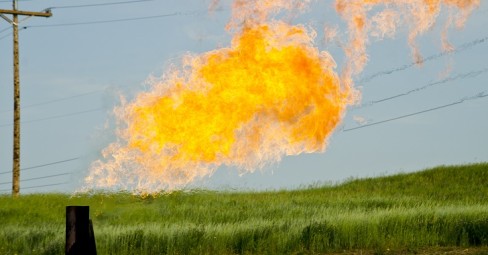 A massive ongoing gas leak in southern California is being compared to the 2011 Fukushima disaster. A recently declassified US government report found that the Fukushima catastrophe was far worse than had been originally reported, prompting many to wonder how severe the California gas leak really is.

Methane, a greenhouse gas 70 times stronger than carbon dioxide, has been spewing into the air from a natural storage gas site in southern California for almost two months, and it isn’t expected to be fixed until this spring. An estimated 145,000 pounds worth of toxic chemicals are leaking from the site every hour. Approximately 700 households have been evacuated.

Officials put out a statement that noted, “SoCalGas began drilling a relief well on December 4. The relief well will intercept the steel pipe of the original well—all of seven inches in diameter—thousands of feet below ground. Then crews will pour in cement to seal the wells off permanently.”

CALIFORNIA GAS LEAK RELEASING AS MUCH TOXIC GAS AS FUKUSHIMA

Cementing the wall is the only plan officials have yet to offer. Critics have expressed skepticism about the plan by claiming, “As if finding a skinny pipe hundreds of feet below ground weren’t hard enough, the presence of all that explosive natural gas adds an extra layer of complication. A tiny spark and everything can go boom. So at the leaking well site, work is restricted to daylight, as lighting equipment could produce stray sparks. (The relief well is far enough away that drilling there can proceed 24/7.)”

According to a commenter at WIRED.com, “that means that natural gas leak is putting out 17.5 times the amount of greenhouse gas (effectively) as all the cars in California (combined) per unit of time! that means (probably) that that single well is putting out as much greenhouse gas as probably half of the country…and it is ongoing. It is like Fukushima down there.”(2)

Following the 2011 Fukushima disaster, the reactors unleashed untold amounts of radioactive debris into the atmosphere, which settled into and contaminated the Pacific Ocean. According to a study by the American Geophysical Union, radiation level from southern California to Alaska have increased, and will continue to increase, in the wake of the disaster.

The federal government and mainstream media has been suspiciously quiet about the Fukushima disaster, claiming that it does not pose a threat to the American public. According to a recently declassified report written by the the U.S. Nuclear Regulatory Commission dated March 18, 2011 – just a week after the debacle – the Fukushima catastrophe was far worse than the general public was led to believe.

In other words, the fuel pools at Units 3 and 4 contained massive amounts of radiation. According to Arnold Gundersen, a former nuclear executive and engineer, “There’s more cesium in that [Unit 4] fuel pool than in all 800 nuclear bombs exploded above ground.…”

In an ironic twist of turns, radiation from the Fukushima disaster that is just now beginning to bombard the West Coast is occurring alongside a major gas leak in Southern California. Officials claim the radiation has become too dilute after traveling across the ocean to harm people. Given the federal government’s recent testimony about the actual severity of the Fukushima disaster, however, these reassurance should be taken with a grain of radioactive sea salt.