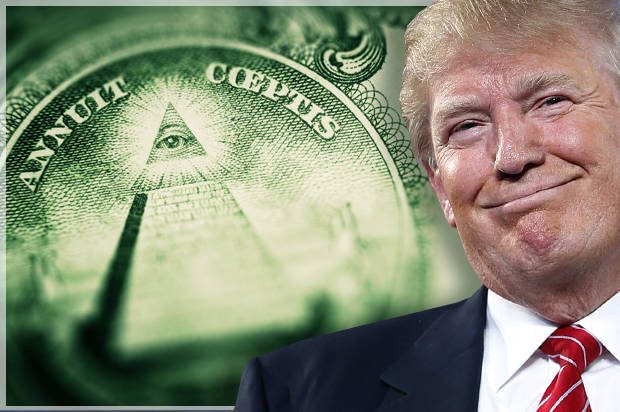 What is Donald Trump’s Role in the Illuminati? Conspiracy Theories on the US President

FOR believers in the Illuminati conspiracy theory each President of the United States is automatically labelled a key member of the alleged secret society.

But then came along Donald Trump – the “outsider” who made it into the White House, and things don’t seem to happen how they are expected to.

So is Donald Trump a member of the Illuminati elite in the eyes of conspiracy theorists?

The Illuminati conspiracy theory claims it is a secret society that actually runs all global governments from behind the scenes and is slowly implementing a so-called New World order (NWO), that will culminate in a global leadership.

The theory varies in extremities from the above at the least, to the Illuminati being a highly Satanic cult that intends returning the devil to earth.

But, Donald Trump seems to have managed to have split the conspiracists on what his relationship with the alleged organisation is – or even if he has one at all.

Website The Conspiracy Zone believes Trump is part of the Illuminati, but is a loose cannon.

Conspiracy Zone pointed to hand symbols made by Trump, which it says are clear indicators of his Illuminati affiliation and added it had evidence he was a skilled “mind controller”.

“We know that Trump is a mind control programmer,” wrote the website.

It added: “If his ego takes him down a road the globalists don’t want him to go, expect him to receive the same end that came to Kennedy.”

The same conspiracy theorists believe JFK was an Illuminati member who defected or said the wrong thing, leading to his assassination, which has spawned its own plethora of conspiracy theories. 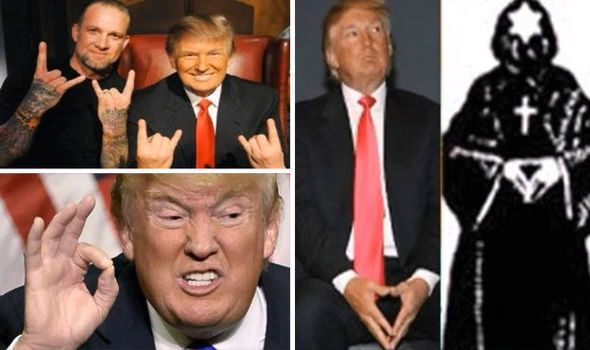 Some people claim Donald Trump’s hand signs give him away as a member of the Illuminati.

Other conspiracy theorists believe Mr Trump is a much bigger cheese within the Illuminati than the Maverick he is portrayed as – and possibly the most senior to come from behind the scenes into public office.

Janis and Gregory Kaighn actually filed a lawsuit against Mr Trump last September, before he won the election, amid claims “Donald Trump is ineligible to run for president because he is plainly a member of the New World Order.”

The Kaighns went onto claim the Trump family has been plotting behind the scenes to fix the 2016 election to ensure the “Trump dictatorship” made it into power.

In an article on Inverse.com, writer Cory Scarola, investigated what conspiracy theorists made of Trump.

He wrote: “Depending on to whom, if anyone, you decide to give credence, Trump is either an Illuminati agent or a New World Order ringleader.

“In either case, conspiracists say his victory in the 2016 election presents a grave threat to the future of American democracy.

“But perhaps more interesting than the theories themselves is the fact that they appear to align in spirit with the feelings many Americans had in the wake of the election: that it was the result of forces we didn’t fully understand until it was too late to reverse them.”

But there are some conspiracy theorists who actually believe Mr Trump is the outsider he is labelled as and has taken on and turned the tables on the Illuminati by being elected.

If that were the case, he would surely be at the top of the Illuminati hit list.

So who do we go to for the definitive answer?

Mr Icke went from a household name as a BBC Grandstand presenter in the 1980s, to a household name for declaring he was the “son of Godhead” and later insisting the Royal family were a race of extra terrestrial lizard humanoids ruling the earth in the 1990s.

Mr Icke, who tours the globe giving his theories to thousand of people at huge conferences, is a signed up believer of the Illuminati conspiracy theory – but refers to it as the Hidden Hand – and says they are really reptilians disguised as humans.

But in YouTube videos and articles on his website he mixes talk of the reptiles and Hidden Hand with genuine political debate.

In a video about Trump filmed soon after his election success, Mr Icke concluded trump was in the Illuminati, and those who saw him as an outsider had been duped.

He said: “It is not difficult to manipulate choice if you control what those choices are going to be and the choices were Hillary Clinton and Donald Trump.

“I think that Trump will be a disaster for those that have put their faith in Trump and they will be disappointed by his time in the White House.

“I don’t think for a second that Donald Trump is an outsider, but that is irrelevant… people thought he was an outsider.”

Mr Icke described the election as a stitch up with people left with no real choice.

He added: “It does not matter who is put in office and that is the problem.

“It is the Hidden Hand who ultimately control these people whether it is Hillary Clinton or Donald Trump.”