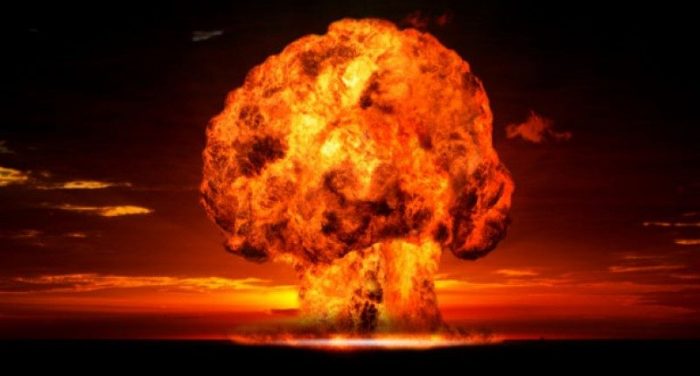 What Would Happen If Yellowstone Supervolcano Was Hit With A Nuclear Bomb?

It’s fair to say that people are enthralled by volcanoes. We get many questions about them. What would happen if Yellowstone caldera erupted again today? (If it’s a powerful blast, then spoiler alert: nothing good.) Can we throw away all our trash in volcanoes? Do volcanoes produce more carbon dioxide than humans on a similar timescale?

Just in the last week or so, a question has appeared at a curiously high frequency. Namely, what would happen if someone detonated a nuclear bomb at the surface of the most famous supervolcano in the world?

Some people just want to watch the world burn, I suppose.

So, let’s get this out of the way as quickly as possible then: I don’t know, but probably nothing. It would have much the same effect as firing a nuclear weapon at a hurricane, a question that the US government’s top scientific agency has already gleefully answered.

Accidentally or intentionally triggering a volcanic eruption is a nothing more than a thought experiment at this stage, and some stellar science communicators have already given it a ponder in their own idiosyncratic way. Each time, slightly different conclusions have been made.

As you may have expected, this particular experiment – placing a nuclear weapon atop a supervolcano – hasn’t been run in the real world before. At no point in human history has anyone been mad enough to try this, but all the current evidence suggests that, when it comes to something like Yellowstone, it would be like firing an air rifle at a tank.

Ultimately, detonating one of America’s most powerful nuclear weapons in the middle of Yellowstone National Park will simply ruin the beautiful landscape, which we can all agree would be a rather terrible thing to do.

Yellowstone supervolcano is fascinatingly massive, with a two-step magma chamber system that in total contains about 58,667 cubic kilometers (14,075 cubic miles) of partially molten rock. Although a high-end, paroxysmal eruption won’t even get close to bringing about the end of the world, it would create a nationwide catastrophe with global ramifications.

Generally speaking, there are a few ways in which you can trigger a volcanic eruption. Crack the overlying rock, and the highly pressurized and eruptible part of the magma chamber would froth up and explosively fragment as it rushes to the surface.

You can also add more dissolved gases – like water – into the magma, as well as cool it a little to induce crystallization; both would have the effect of supersaturating the magma in dissolved gases, which forces them to exsolve into bubbles, adding buoyancy and amping up the internal pressure of the magma. Those are the basics.

A far more tenuous hypothesis posits that pressure waves, generated by a nearby earthquake – or, perhaps, an artificial explosion – could trigger a volcanic eruption. This has come up recently with regards to North Korea and its very own Mount Paektu, so let’s take a look at this possibility first.

A team of South Korean researchers, using a series of mathematical equations, suggested that pressure waves from nearby subterranean nuclear blasts constitute a “direct threat to the volcano.”

This essentially means that, if the magma chamber is on the verge of an eruption already, the pressure waves may destabilize the magma and nudge the volcano into erupting. This relies on a wide range of assumptions, however, and there’s no evidence that Paektu is primed and ready to go.

At the same time, plenty of increasingly strong nuclear tests have occurred near the stratovolcano since the publication of that 2016 study, and nothing volcanic has happened. It’s just a hypothesis right now, and a fairly controversial one at that.

Earthquakes likely won’t do much either. Steven Gibbons, a Norway-based seismologist with a penchant for the science of nuclear blasts, told IFLScience: “There was a magnitude 7.4 earthquake in Yellowstone in 1959 and not even that managed to trigger Armageddon.”

Overall, then, “it is most likely that the considerable amount of harm done by the nuclear explosion would be your biggest problem,” he added.

T’is But A Flesh Wound

There’s more. Official documentation by the US government describes several underground nuclear tests occurring on Amchitka Island, in Alaska, back in the 1960s and 1970s. Amchitka is part of the Aleutian Islands Arc, a volcanically very active part of the world, so it’s worth mentioning that several fairly powerful nuclear weapons had no effect whatsoever on the nearby volcanoes.

(Incidentally, the final detonation – the Cannikin shot – was protested by a group of environmental activists, sailing on a fishing boat named The Greenpeace. The rest, as they say, is history.)

So, based on all the available evidence, it doesn’t look like the “shock” of a nuclear blast itself, or any kind of significant shaking, will do anything of note to Yellowstone.

Well what about a powerful nuclear device like America’s B83, a bomb that could release 5 quadrillion joules of energy in a heartbeat? Could that crack the crust just enough to cause a catastrophic collapse and subsequent depressurization event?

Nope. Even at its thinnest segment, the shallow magma chamber is around 5 kilometers (3.1 miles) or so beneath some fairly dense crust – and it takes a lot of energy to excavate it. As it so happens, people have tried, and no manmade crater that deep has ever been created.

To be fair, subterranean nuclear tests do have a history of generating fairly sizeable subsidence craters. During the Cold War, both the US’ “Project Plowshare” and the Soviet’s “Nuclear Explosions for the National Economy” both used buried nukes to see how good they were at digging holes in the ground. In total, 151 so-called Peaceful Nuclear Explosions (PNEs) were carried out by both sides.

The largest crater produced as part of Operation Plowshare was formed in Nevada on July 6, 1962. A shallowly buried nuke, equivalent to 104 kilotons of TNT, created a crater (named “Sedan”) that was truly vast in terms of volume, but was “only” 100 meters (328 feet) deep. 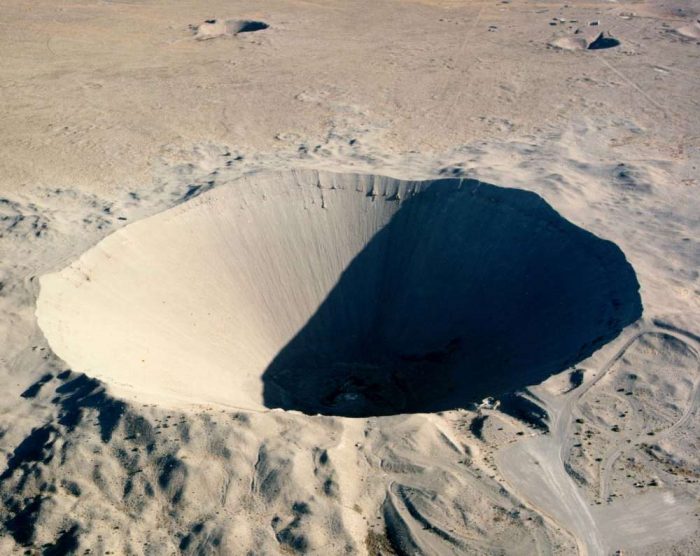 The modern B83 nuke is about 10 times more energetic, TNT-wise, but that doesn’t mean a crater will be10 times deeper – that’s just not how craters work. A nuke at the surface is way above something called the optimal depth of burial, which is the depth required to produce the largest crater for explosions of a set energy.

Just look to the most powerful nuclear blast in American history, the Castle Bravo test in the Bikini Atoll on March 1, 1954. Coming in at 15 megatons – way more powerful than the B83 in use right now – this surface detonation, which took place in a coral reef, dug a hole in the reef only 76 meters (250 feet) deep.

Even if you did somehow manage to crack open the crust, there’s no indication that the magma there is mostly eruptible. Magma spends a lot of its life partially molten and partially solid, so it’s more like a mush than one or the other.

Magma chambers generally don’t erupt unless half of their volume is completely molten, and right now, Yellowstone’s shallow reservoir contains magma that is 15 percent molten at most.

The point is that we may think nukes are almighty and powerful, but they’re pipsqueaks compared to nature. Sorry to disappoint those hoping for an apocalypse, but among volcanologists, there seems to be a general agreement that the nuke would have no effect on Yellowstone.

The Scientist-In-Charge at Yellowstone Volcano Observatory, Dr Michael Poland, didn’t exactly beat around the bush, telling IFLScience: “It is preposterous.”

“Think of all the major earthquakes that would have struck the region since the last lava eruption 70,000 years ago, and the last big explosion 631,000 years ago,” he added. “They were many times bigger than any nuclear bomb, and impact the Earth directly – and those clearly haven’t caused any eruptions.”

Tobias Durig – a volcanologist based out of the University of Otago in New Zealand – summed the reactions up well.

“I would completely agree that throwing a nuke on Yellowstone would most probably trigger nothing,” he said. 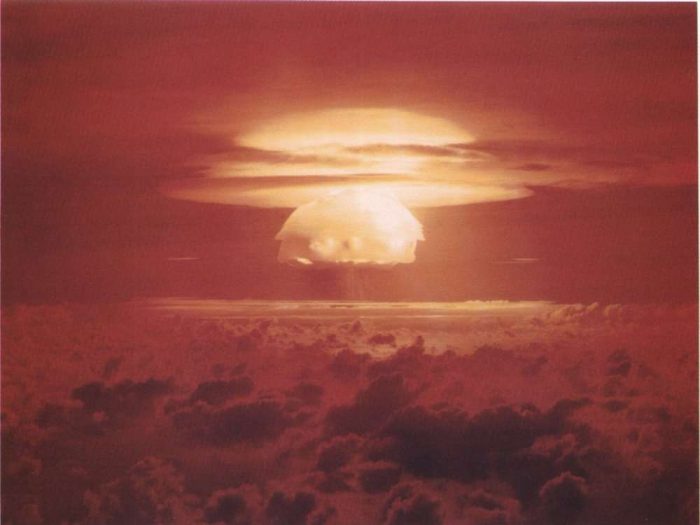