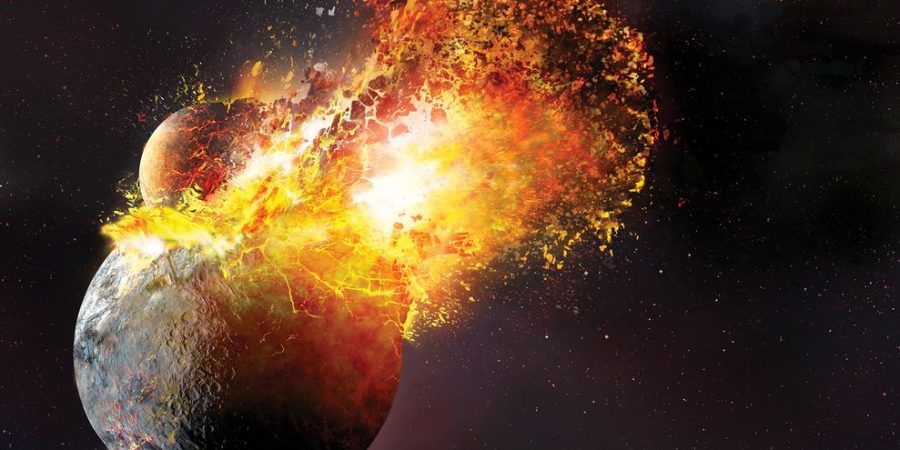 For years planetary scientists have chalked up the moon’s origin to an impact between Earth and a Mars- or larger-sized body called Theia. According to this theory about 4.5 billion years ago a newly-coalesced Earth was hit by another protoplanet. The impact pulverized a sizable part of our young planet, sending the debris into orbit where, under its own gravity, it accreted to make our moon. A study published today (Jan. 9) in Nature Geoscience is calling this into question, proposing several impacts of smaller bodies instead of a single huge one.

“We have all been focused on the idea of finding a single impact,” says Robin Canup, a planetary scientist at Boulder’s Southwest Research Institute. “The out-of-the-box thinking here is to relax that assumption, asking, Can we form the moon in little bits?” Canup was not involved in the study, though she has herself proposed that the moon formed when a Earth collided with another protoplanet nearly the same size.

The Earth-moon system is a local oddball. First, the relative size of Earth’s moon is huge compared with the moons of the four giant planets Jupiter, Saturn, Uranus and Neptune. None of their moons are more than a few thousandths the mass of the planets they orbit. Mars’s two moons are even smaller—hardly more than big boulders. Our moon is a little more than a quarter of the diameter of the Earth and has about 1.2% of Earth’s mass. Pluto and it’s moon Charon are the only bodies that are remotely similar.

Secondly, the composition of the moon looks a lot like Earth’s mantle: the ratio of isotopes of oxygen, titanium, and tungsten are nearly identical to that on Earth. The giant planets’ moons are nowhere near so similar to their hosts.

Last, there’s the way the Earth and moon spin. Earth is slowing down; days get a fraction of a second longer and the moon moves about an inch further from Earth each year. This happens because of the conservation of angular momentum: to use a hoary example, a skater spins faster when she pulls her arms in and slower when she extends them. The moon, in this metaphor, are the arms, and the Earth is the body; as tidal friction slows down the Earth’s rotation around its own axis, the moon moves farther away to conserve the overall angular momentum of the Earth-moon-system. That isn’t like other planet-moon we know of, and it means that any theoretical large-scale impact of a protoplanet with the Earth would have needed to have happened in a way to get our planet spinning faster than it was before.

The theoretical Theia impact would have produced the right amount of angular momentum, if it approached from the right angle and was an off-center hit. It would also explain the relatively large size of the moon and its composition—sort of. The problem is that the odds of getting a single impact that hits in just the right way are relatively small. On top of that, the model also has to assume Theia was made of material very similar to Earth’s mantle. “When you do the modeling, you see the debris disc is mostly impactor material,” says Rahica Rufu, a PhD student at the Weizmann Institute of Science in Rehovot, Israel, and lead author of the new study. “The impactor has to be similar to Earth for this to work.”

Yet Mars, Rufu notes, is very different, as are the asteroids. Who knows what Theia’s composition looks like? Only 1-2% of the simulated single impacts in previous studies formed a moon like ours, assuming some 70-80% of the material that ended up in orbit was from Theia. For the impactor to kick up lots of mantle material but almost nothing of itself, you’d need a strike that falls in just the right way—not too head-on, and not too grazing. That Rufu says, seems improbable.

Assuming several impacts, all from bodies between 0.01 and 0.1 times the Earth’s mass, allows the compositions to “average out.” One might have more of a certain isotope of oxygen than the Earth, another might have less. And the odds of a hit by many small objects are greater than getting hit by a single big one—large objects are relatively few and far between. (Even now, on any given day, thousands of dust-sized meteors burn up in Earth’s atmosphere, but a rock big enough to hit the ground is a rarity.) Rufu’s simulations result in a chance of 10% or more of getting the Moon we see today.

Canup says the big challenge for the multiple impact model is angular momentum. Something had to get the Earth-moon system spinning as fast as it does. A single big hit could spin things up or slow the system down, but multiple hits would have a harder time doing that, because the impactors would come from random directions. On the other hand, in single-impact models, the mass of the impactor of Earth has to be just so to produce the rotation of the Earth-moon system we see now. While it isn’t a deal breaker for the multiple-impact theory, it will require more research.

Another challenge would be if a sample of rock from Venus showed the second planet from the sun was very similar in composition to Earth, Canup says. The reason is what we believe Mars and the asteroids formed with compositions different from Earth and the moon. Therefore any other bodies forming in that region were also likely to differ from Earth, but planetary scientists are less sure about the places between say, Mercury and Earth. Getting a rock sample from Venus would show that even planets that formed in the same neighborhood can differ greatly, or it could show they don’t. If Venus turns out to be very similar to Earth, then the odds that Theia was similar go up. If Theia was very similar then the problem of the similarity of the Earth and moon’s composition a single impact presents is less acute, and multiple impacts are less necessary to explain it. But right now many details of Venus’ composition are still unknown—no probe has ever brought back a rock sample or done the kinds of detailed isotopic analyses we’ve been able to do on moon rocks.

Rufu says she has more studies in the works to further refine the hypothesis, and address some of the objections. “The formation of the moon is still a puzzle, and it’s a very interesting puzzle,” Rufu says. “If we can understand that we can understand how other satellites are formed, and even the moons of exoplanets.”