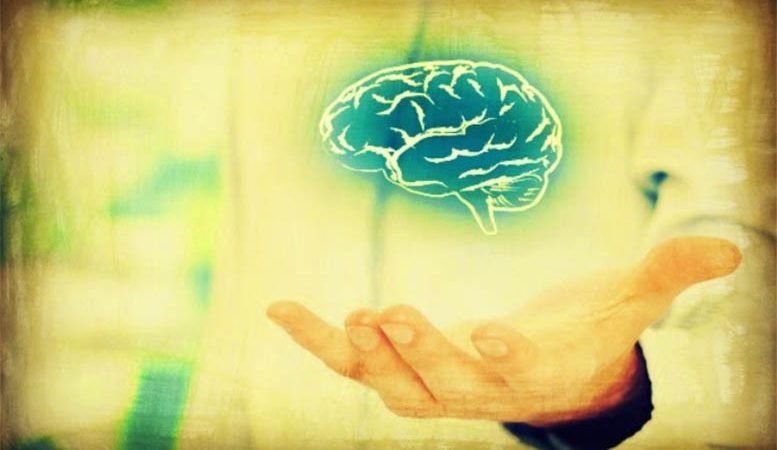 What’s Behind the Doubling of Brain Tumors In Denmark?

Since 1990 brain tumors and tumors of the central nervous system (CNS) have more than doubled, according to a report by the Swedish Radiation Protection Foundation Stralskyddsstiftelsen published January 20, 2017 [1].

The number of patients is on a steady increase since 2004-2005. Is that coincidental with the increase of smart technology, which uses microwaves to implement instant access and networks? In 1990 the rate was 827 patients, whereas in 2015 it more than doubles to 1807 patients or 2.185 times!

The rise in malignant and non-cancerous tumors is happening in younger patients, those who are more likely to be using smart technology gadgets, e.g., iPhones and Wi-Fi at school or work. 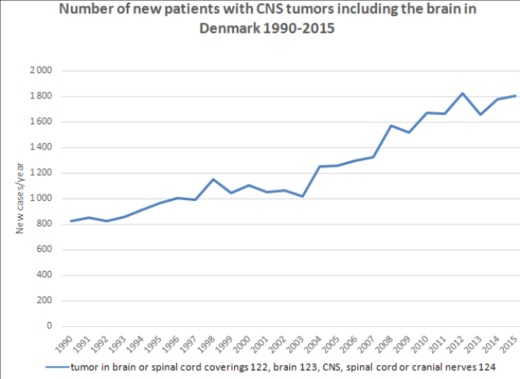 The breakdown according to brain and spinal cord cover (122), brain (123), and CNS spinal cord, cranial nerves (124) tumors is depicted in the color-coded graph below. 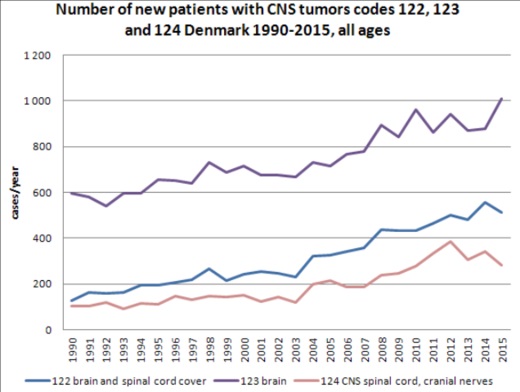 The frightening part about what’s going on in Denmark is that CNS tumors are almost as common as melanoma in those aged 0 to 39 years. 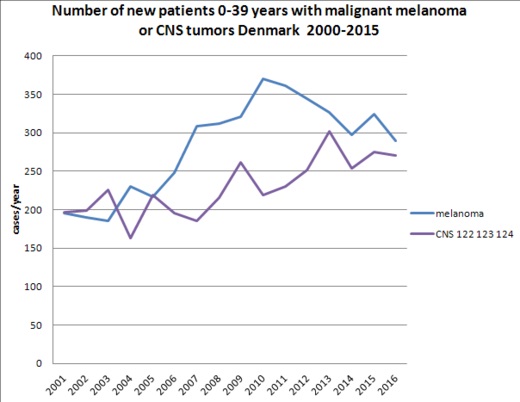 I find it rather interesting that conflicting reports exist in countries, e.g., Denmark and the United States. The U.S. National Cancer Institute claims no increase in brain tumors are taking place; the Swedish Radiation Authority argues “cancer rates in Sweden and other countries do not show any increase that might be attributed to the massive mobile phone use that started in the beginning of this century”; and the Danish Cancer Registry who issued a report stating under-reporting of cancer cases occurs.

The overall completeness of the SCR [Swedish Cancer Register] is high and comparable to other high quality registers in Northern Europe. For most uses in epidemiological or public health surveillance, the underreporting will be without major impact. However, for specific research questions our findings have implications, as the degree of underreporting is site specific, increases with age, and does not seem to be random, as diagnoses without histology or cytology verification are overrepresented. An annual comparison of the SCR against the HDR [Hospital Discharge Rate] could point to hospitals, geographic areas or specific diagnoses where organizational and administrative changes should be introduced to improve reporting.

However, “Case control studies repeatedly show increased risks for CNS tumors from mobile and cordless phone use” [1] and here’s what is said about that:

Ever since 2010 all studies investigating risks for brain tumors from mobile phone use over 30 minutes to one hour a day over several years have found increased risks for CNS tumors (glioma, acoustic neuroma and also meningioma).1 Today 75% of Swedish 16 year old girls use their “smart phone” over 3 hours a day and they have been wrongly informed that there are no health risks observed, often with reference to incorrect claims about brain tumor incidence trends.

– It is unethical to wait for even more people to be diagnosed with brain tumor before the industry, government and authorities warn mobile phone users of the serious health risks with today’s intense and prolonged use, says Mona Nilsson, President of the Swedish Radiation Protection Foundation.

1 Hardell et al. 2013 (glioma, acoustic neruoma, meningioma); Interphone 2010 (glioma, meningioma) and 2011; Coureau et al. 2014 (glioma and meningioma); Pettersson et al. 2014 (acoustic neuroma); Sato et al. 2011 (acoustic neuroma)
The Swedish Radiation Protection Foundation report is only one of hundreds, if not thousands, of reports and/or published studies indicating that cancer, whether it is CNS or some other etiology, definitely is on the increase, especially in folks using microwave technology and its ‘smart’ gadgets. The younger generations are most affected too. Probably consumers really don’t understand the ‘mechanics’ and physiology of how microwave radiation works. It’s not as benign as promoters and acolytes would have us believe.

Unlike other particles and pathogens, microwaves can penetrate directly into the body. This is a problem for the immune system which relies a lot on skin as a barrier against pathogens. Some of the possible consequences found from microwave radiation include: Morphological alterations of immune cells; Changes in lymphocytes dependent on the carrier frequency; Reduced T lymphocyte count; and Hypersensitivity manifesting as autoimmunity.” [3] [CJF emphasis added]

Note what is said about microwaves penetrating directly into the body! The human body on average is between 50 and 70 percent water. Water being impacted by microwave radiation, known as non-thermal radiation, presents a physiological (biological) problem insofar as 90 percent of the body’s water acts as an information system or network for cells.

As an example, just holding an operating smart phone in your hand allows negative waves to travel up the hand, into the arm to pollute the body. That does not take into consideration holding an operating smart phone, which is much less safe than other cell phones according to some researchers, next to the side of your head. Invariably, when tumors are found, they exist next to where a cell phone touched the head or body, e.g., side of head, breast (some females place cell phones in their bras; that’s a huge NO-NO!), and testicles (men carry active cell phones in their trouser pockets).

The current craze of ‘smart’ appliances, gadgets and technologies is nothing short of crazy, in my opinion, since it creates a SEA of electrical pollution impacting everyone. The most vulnerable are fetuses, children and the elderly.

Here are some consumer products you may want to re-evaluate for EMF/RF/ELF exposures: cell, smart and iPhones; Wi-Fi and routers; computers – especially operating laptops resting on your lap or body; baby monitors; cordless phones; computer games for infants and toddlers; smart utility meters.

That reminds me of the cigarette industry’s infamous doctors’ claims in the 1950s that “most doctors preferred Camels cigarettes.” How many doctors today would want to be caught smoking?