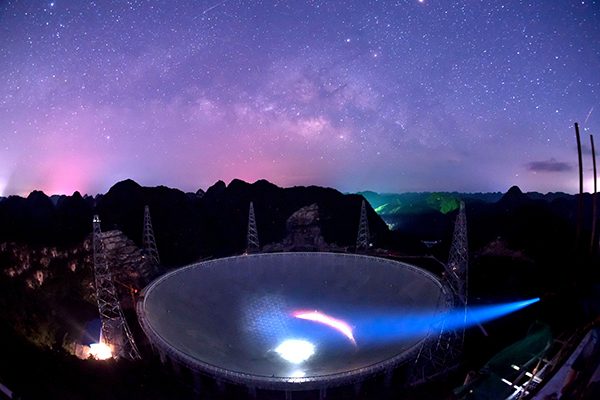 It would seem China is about to take the lead in the global effort to detect an alien signal.

When we think of what a first contact situation might be like, we tend to imagine either a global collaborative effort, or the stereotypical ‘UFO landing on the White House lawn’ type scenario.

The same perception of global collaboration is true when it comes to listening out for alien signals – something SETI has been attempting to do for years.

But what if one country was to independently succeed and chose not to share with everyone else ?

With the country’s vast resources at their disposal, Chinese scientists and engineers are currently working on plans for a major new search for signs that we are not alone in the universe.

But would China be willing to share such a monumental discovery ?

“FAST is a leap forward for Asia’s presence in radio astronomy and possibly in SETI,” author Michael Michaud told Space.com in a recent interview.

“Indeed, the Chinese now can be major players in SETI if the nation chooses to be.”

“Most scientific fields had been dominated by Americans and other Westerners since the end of World War II. China is now catching up with, and in some areas surpassing, Western achievements.”

Not only can China receive signals using the new telescope, but it can also transmit them as well.

What would happen if it was to make first contact with an extraterrestrial civilization ?

These questions are, of course, entirely hypothetical and it is highly unlikely that China – or anyone else for that matter – will be talking to ET anytime soon.

Nonetheless, such considerations open up the question of exactly who, in the event of first contact, an advanced alien race would actually choose to communicate with.