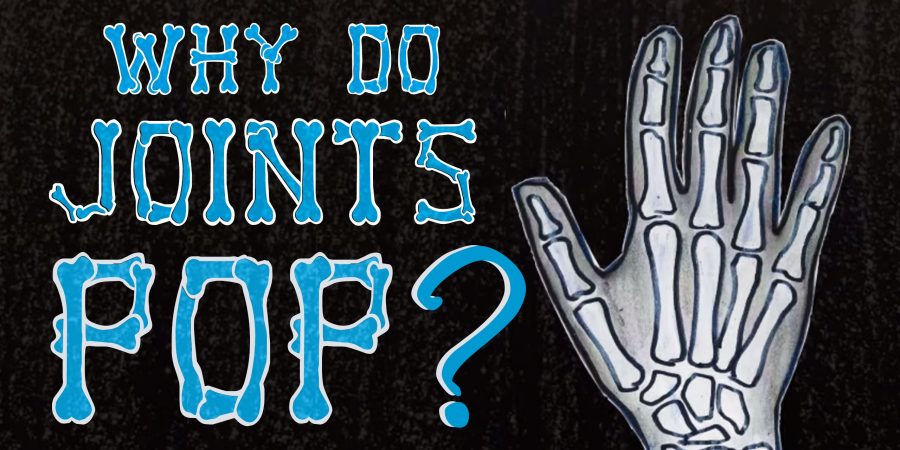 Why Do Our Joints Crack and Pop – Is It Bad?

We’ve all had the experience of standing up and hearing a loud pop in our back or hip, or trying to tiptoe through the house only to have our foot make a cracking sound each time we take a step. So what’s happening in our joints when this happens, and is it a bad sign?

What if we purposefully crack our knuckles? Will we get arthritis like our parents used to tell us?

The noise we hear when our joints pop is likely to be due to movement of the tendon over bone. Tendons attach muscles to bones and are a bit like elastic bands that stretch over joints. It is thought tendons can make a popping noise when they move quickly across a joint.

When a joint moves, the position of the tendon changes relative to the joint. Sometimes the tendon will shift its position slightly, causing it to make that popping sound as it snaps back to its normal place. This noise is quite normal whether it’s loud or soft, or happens frequently or not.

The chronic degeneration of joint cartilage, known as osteoarthritis, leads to stiffness and reduced mobility of the joint. When this cartilage is damaged the surfaces of the bones rub against each other during movement, causing pain.

Many factors contribute to arthritis, and people experience joint pain for many possible reasons, including genetics, age, weight and previous injury.

Several causes of osteoarthritis have been identified and preventative strategies need to be developed. But, as far as the question of a causal link between joint cracking and osteoarthritis, there doesn’t appear to be any compelling evidence.

Is cracking my knuckles bad for me?

Knuckle cracking is a habitual behaviour involving manipulation of the finger joints. For a long time, it has been suggested cracking your knuckles will increase the likelihood of developing arthritis later in life. Although this idea has persisted across generations, only in recent decades has any research looked scientifically at the question of the consequences of knuckle cracking.

Synovial fluid is a substance found in the cavities of joints. It has a consistency similar to egg white and its purpose is to lubricate the joint to reduce friction during movement.

Early research suggested when the joint is extended the pressure within the joint is greatly reduced, causing gases dissolved in the synovial fluid to form microscopic bubbles or cavities. Eventually, joint fluid rushes into the areas of low pressure and the larger bubbles collapse, or pop, producing that familiar sound.

In 2015, a group of researchers from Canada used magnetic resonance imaging (MRI) to investigate the mechanisms of knuckle cracking. They concluded knuckle cracking occurs as a result of formation of space in the synovial fluid in the form of bubbles rather than the collapse of the bubbles due to synovial fluid rapidly filling the space, debunking the previously held notion.

Donald L. Unger was a medical doctor who was curious about the long-term effects of knuckle cracking, so he cracked the knuckles of one hand only for 60 years. He found there was no difference in the amount of arthritis between his hands at the end of this time.

There has been some formal research on the topic. An early paper from 1990 found cracking the knuckles over a long period was associated with swelling and reduced grip strength in some people. However, the authors found no difference in arthritis of the hands between people who habitually cracked their knuckles and those who didn’t.

A 2011 study assessed radiographs of people, aged 50 to 89 years, according to the frequency of their knuckle-cracking behaviour. Again, the prevalence of osteoarthritis of the hands was similar between people who cracked their knuckles often and those who did so rarely.

The chief morbid consequence of knuckle cracking would appear to be its annoying effect on the observer.