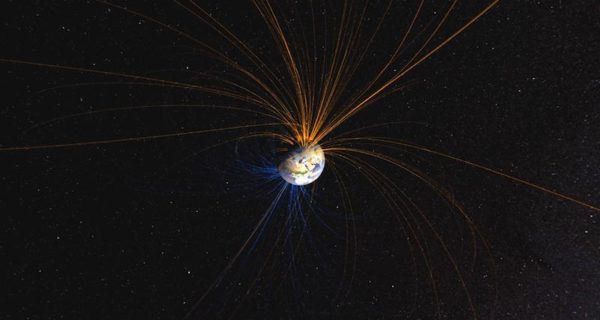 The Earth’s magnetic field surrounds our planet like an invisible force field – protecting life from harmful solar radiation by deflecting charged particles away. Far from being constant, this field is continuously changing. Indeed, our planet’s history includes at least several hundred global magnetic reversals, where north and south magnetic poles swap places. So when’s the next one happening and how will it affect life on Earth?

During a reversal, the magnetic field won’t be zero, but will assume a weaker and more complex form. It may fall to 10% of the present-day strength and have magnetic poles at the equator or even the simultaneous existence of multiple “north” and “south” magnetic poles.

Geomagnetic reversals occur a few times every million years on average. However, the interval between reversals is very irregular and can range up to tens of millions of years.

There can also be temporary and incomplete reversals, known as events and excursions, in which the magnetic poles move away from the geographic poles – perhaps even crossing the equator – before returning back to their original locations. The last full reversal, the Brunhes-Matuyama, occurred around 780,000 years ago. A temporary reversal, the Laschamp event, occurred around 41,000 years ago. It lasted less than 1,000 years with the actual change of polarity lasting around 250 years.

The alteration in the magnetic field during a reversal will weaken its shielding effect, allowing heightened levels of radiation on and above the Earth’s surface. Were this to happen today, the increase in charged particles reaching the Earth would result in increased risks for satellites, aviation, and ground-based electrical infrastructure. Geomagnetic storms, driven by the interaction of anomalously large eruptions of solar energy with our magnetic field, give us a foretaste of what we can expect with a weakened magnetic shield.

In 2003, the so-called Halloween storm caused local electricity-grid blackouts in Sweden, required the rerouting of flights to avoid communication blackout and radiation risk, and disrupted satellites and communication systems. But this storm was minor in comparison with other storms of the recent past, such as the 1859 Carrington event, which caused aurorae as far south as the Caribbean.

The impact of a major storm on today’s electronic infrastructure is not fully known. Of course, any time spent without electricity, heating, air conditioning, GPS or internet would have a major impact; widespread blackouts could result in economic disruption measuring in tens of billions of dollars a day.

In terms of life on Earth and the direct impact of a reversal on our species we cannot definitively predict what will happen as modern humans did not exist at the time of the last full reversal. Several studies have tried to link past reversals with mass extinctions – suggesting some reversals and episodes of extended volcanism could be driven by a common cause. However, there is no evidence of any impending cataclysmic volcanism and so we would only likely have to contend with the electromagnetic impact if the field does reverse relatively soon.

We do know that many animal species have some form of magnetoreception that enables them to sense the Earth’s magnetic field. They may use this to assist in long-distance navigation during migration. But it is unclear what impact a reversal might have on such species. What is clear is that early humans did manage to live through the Laschamp event and life itself has survived the hundreds of full reversals evidenced in the geologic record.

Can we predict geomagnetic reversals?

The simple fact that we are “overdue” for a full reversal and the fact that the Earth’s field is currently decreasing at a rate of 5% per century, has led to suggestions that the field may reverse within the next 2,000 years. But pinning down an exact date – at least for now – will be difficult. 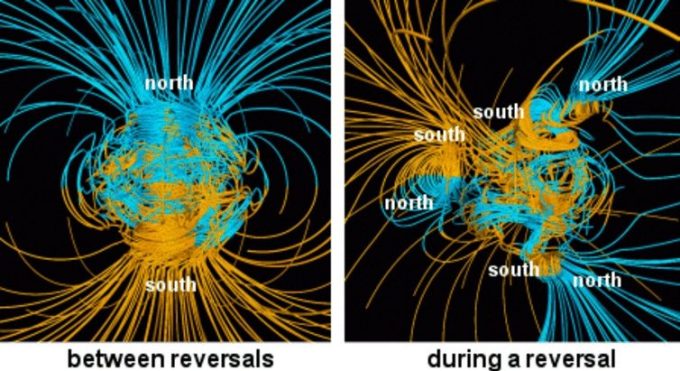 The Earth’s magnetic field is generated within the liquid core of our planet, by the slow churning of molten iron. Like the atmosphere and oceans, the way in which it moves is governed by the laws of physics. We should therefore be able to predict the “weather of the core” by tracking this movement, just like we can predict real weather by looking at the atmosphere and ocean. A reversal can then be likened to a particular type of storm in the core, where the dynamics – and magnetic field – go haywire (at least for a short while), before settling down again.

The difficulties of predicting the weather beyond a few days are widely known, despite us living within and directly observing the atmosphere. Yet predicting the Earth’s core is a far more difficult prospect, principally because it is buried beneath 3,000km of rock such that our observations are scant and indirect. However, we are not completely blind: we know the major composition of the material inside the core and that it is liquid. A global network of ground-based observatories and orbiting satellites also measure how the magnetic field is changing, which gives us insight into how the liquid core is moving.

The recent discovery of a jet-stream within the core highlights our evolving ingenuity and increasing ability to measure and infer the dynamics of the core. Coupled with numerical simulations and laboratory experiments to study the fluid dynamics of the planet’s interior, our understanding is developing at a rapid rate. The prospect of being able to forecast the Earth’s core is perhaps not too far out of reach.