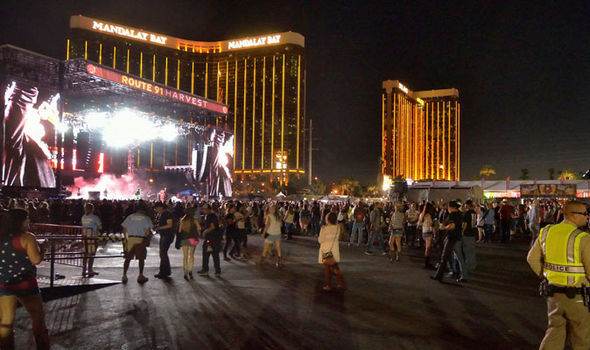 Why the Shooter May Not Have Been At Mandalay Bay

Editor’s note: Please keep in mind this is someone’s personal theory that we are sharing (not mine or anyone affiliated with BENDEDREALITY), we are sharing it because it is nearly impossible to know if the mainstream account (or the information they were given by officials) of the events are accurate or not. Our sharing of this person’s theory is not meant to offend anyone who believes the more commonly accepted accounts of the event OR has experienced the tragedy first hand.

SHOOTER COULD NOT HAVE BEEN AT MANDALAY BAY

The gunfire is too loud over the concert, it was happening at the concert . Windows are easy to kick out later.

HERE IS THE KEY VIDEO THAT DESTROYS THE LIE. This is just a file on this site, which you can right click and save. This video is evidence, there is no way the official story holds up against this. The gunfire was simply too loud and too local in reference to the concert for the official story to hold.

THE MOST IMPORTANT THINGS -POINT ONE: If it was originating 1500 feet away at Mandalay Bay, it was not close enough to totally blast over the concert loud enough to cause the performers, who wear monitor equipment to block all sound, to stop playing. The concert was LOUD when the shooting happened. You simply can’t outdo a concert from that far away, no one would have heard it over the music, especially the performers, who have equipment that is designed to block the sound of the concert and let them hear only the sound of their instruments, as they are played in reference to the other instruments. The failure of this system is what did Mariah Carey in on New Years, when you are playing that “big” you have to be directly piped to the mixing board with all other sources of sound blocked. This would have prevented the performers from hearing anything. Why did they stop? ANSWER: Gunshots from above them on the same stage would have been loud enough. What happens on stage in the video is a supreme bust of the official lie.

POINT TWO: Audio recording equipment (even on a camcorder) automatically sets the level of the audio to optimal. The concert was LOUD, it is obvious because the crowd cannot be heard when the music is playing. Then gunfire clearly is louder than the concert, even though according to the official story it originated 1500 feet away. The automatic level control in the audio recorder proves the gunfire was simply too loud in relation to the music to have come from Mandalay Bay, it had to have originated above the speakers. That is the only way the automatic level control circuit would not have had the recording level choked back so far that the gunfire would not be heard. The recording should not have had the sound of gunfire so prominent, IF it even managed to record the sound of the gun at all. Obviously after the music cut the recorder would pick up the gunfire from that distance because it would automatically turn the record volume up.

POINT THREE: Watch the video. The stage crew cuts everything to black, and then takes the stage lighting, points it directly out at the crowd, and turns it back on to illuminate the crowd. The shooting does not resume until this process is complete. This was a deliberate act that no one would have thought of off the cuff unless it was planned ahead of time. Without a doubt, someone on the stage crew was involved in this shooting. Interesting it is that the concert was called the “Route 91 harvest” and took place on route 91!

Here is what I think happened. The shooters were actually situated above the stage. The windows on Mandalay Bay were kicked out for the story line. I have a video that shows it all unfold. I do not think the singer knew what was going on. I believe it was people planted in the crew that did this

POINT FOUR: There were only two buildings – Luxor, which was far away and would have echoed upward due to its pyramid shape and smooth glass, which would make echoes be inaudible on the ground (to any significance, especially over a loud concert,) and Mandalay Bay, which is unlikely because the shooter was shooting away from any surface that could echo (especially that loudly) if the official story is not a lie. There are no echoes, it is two guns with choreographed shooters. They occasionally screw up and you can hear one gun stop and the other start.

They are saying it sounds like multiple guns because it was echoing off “all the buildings”. PROBLEM: There simply were no buildings for there to be any echoes off of. This was multiple shooters, who happened to predominantly shoot at the same time.

Once I was able to go over the scene clearly, it is obvious such a shooting was not possible as stated. Additionally, the concert footage in other videos is clear, clearly showing Mandalay Bay and there are no muzzle flashes coming from Mandalay Bay, and no apparent broken windows. The lights above the stage were too bright for muzzle flashes to show if they originated in the same area.