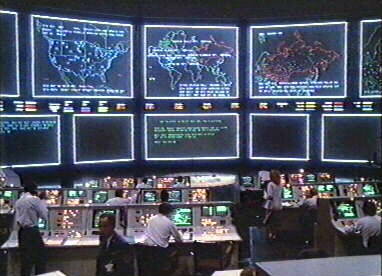 The latest batch of emails from John Podesta’s Wikileaks reveals discussions on “Fastwalkers” and a Hazard Support System to aid in identification, a UFO base off the coast of Florida, mentions of Hillary Clinton’s recent disclosure statements, a job recommendation for John Podesta’s “UFO Project”, and amnesty recommendation for government officials who come forward with the truth.

The first email is about the DSP Program and offers information regarding “Fastwalkers”, UFO’s entering our atmosphere from deep space, and the Aerospace Hazard Support System developed to identify and provide a measure of protection to the public.

Just tuck this in your UFO files for future reference.

One of the government programs that collects hard data on unidentified flying objects is the USAF DSP satellite program.

I can add a little insight to rumors published on the web. While I was never fully briefed into the DSP operation directly, I was introduced to them as the US prepared for Operation Desert Shield and Desert Storm. On occasion, I had lunch with a few of them in the cafeteria of a highly classified organization in El Segundo, CA. No one could get into the cafeteria without TS/SCI clearances, so this was not “lightweight group of gossipers.”

One of these times, a member of that group was really excited – said they’d just picked up Fastwalker (I assumed that same day). He described how it entered our atmosphere from “deep space” (origin actually unknown, of course, but from the backside of the satellite) and zipped by the DSP satellite pretty closely on its way to earth.

Not only was it going very fast but it made a 30 degree course correction (turn) which means it did not have a ballistic (free fall) reentry trajectory that a meteorite might have. So, it was under some sort of control – although whether it was “manned” or just “robotic” there’s no way to tell.

Although its now 24 years later, one factoid makes me think the USAF is still collecting information on these Fastwalkers. Reading the current official USAF “DSP Fact Sheet” there is this line near the end: In addition, researchers at The Aerospace Corporation have used DSP to develop portions of a hazard support system that will aid public safety in the future.

Also, much of the information on this site is accurate although I do not know the author or his sources: http://ufodigest.com/shadowmag/extra/topsecret.html

Somewhere within that USAF program office is many year’s worth of Fastwalker data. If someone were to collect and analyze it, patterns will emerge that provide information about the various types of craft and their destinations, which would add substantiation to eyewitness claims on the ground about UFO activity.

Furthermore, it would be interesting to understand the dates of these appearances – is there a certain time of the every year they swarm in (which might indicate a resource mining operation) or might there be a correlation with major events on earth, (such as the detonation of the first atomic bomb at White Sands in 1945 although no DSP’s existed to provide any info on that particular event)?

The Blue Book email exposes a UFO base off the coast of Florida.

Just tuck this in your UFO files for future reference too.

Recently, I noticed this Sentry Eagle information, even though the original book was written in 1998:

I don’t know Dan Sherman and I don’t know if this non-ECI program is real. Caveat – I did work with Ft. Meade on several classified communications projects, including President Reagan’s dedication of the new HQ building in September 1986 when I was a contractor to WHCA.

But this report did trigger the memory of another event that may be of use should you ever want to follow up on the UFO stuff.

In that same TS/SCI building cafeteria in El Segundo, I had lunch with a senior USAF NCO who had worked for Project Blue Book in the 1970s (after it had been “officially disbanded). He was an ELINT technician (electronic intelligence) who flew in RC-135s from MacDill AFB in Florida. The “normal” target was Cuba where they did lots of snooping and sometimes challenging the Cubans to turn on radar and other systems.

He said there were times when they were diverted from these missions to track UFOs off the east coast of Florida. His claim was the UFOs had a landing and takeoff spot in the ocean east of Miami, north of Bermuda. He also claimed there was a specific electronic signature (frequency) emanating from them when they were going into or coming out of the water, so they were easy to track. On several occasions they filmed the UFO as it transitioned from water to air or vice versa. One last item is he was occasionally assigned to fly in a USAF weather aircraft (WC-135) when they had a hurricane hunting mission over the usual UFO area, where his specific assignment was kept secret from the other crew members. He would always report back to a dedicated USAF intelligence officer on base when they returned from a mission. He did not know where the intel that he collected was sent for processing or storage (WPAFB in Dayton would be the obvious choice). High quality film of UFOs is “out there” somewhere!

So, if true, Blue Book was not disbanded – only the outer layer of the onion (the “public information layer) was stripped away in 1970.

And, this may be part of the Sentry Eagle program with the USAF and NSA sharing UFO elint information. Might be some leads in that area too.

This email is about the recommendation of the son of Dish Network’s for John Podesta’s “UFO Project”. It is unclear what UFO project is being discussed. It may or may not be related to Tom DeLonge’s (singer Blink-182) UFO disclosure documentary.

John …. Look at the last line of

Subject: John …. Look at the last line of

Sent from my iPhone

This article on Hillary’s comments about extraterrestrial life made me think of you two and remind me to connect you.

John – As I was telling David the last time I saw him, the two of you are the biggest believers in ET life who I know and I think you’d enjoy talking with one another. I know that neither of you have much time, but I think you’d have a fascinating time discussing it if you ever get together!

Hillary Clinton says that aliens may have already visited humanity. “I think we may have been [visited already]. We don’t know for sure,” the Democratic presidential front-runner told The Conway Daily Sun during a campaign stop in New Hampshire last week.

Her comment came after being asked about her husband Bill Clinton’s comments during an appearance on late-night show “Jimmy Kimmel Live” in 2014, when he suggested that extraterrestrial life could exist.

“I just hope it’s not like ‘Independence Day,'” said Clinton, referring to the film where aliens attack earth.

Hillary Clinton told a Sun reporter that she would “get to the bottom” of UFOs. The reporter said the two spoke before, in 2007, when Hillary Clinton said the top open-records request her husband receive at his library involved UFOs.

She also noted that campaign chairman John Podesta, who served as White House chief of staff under Bill Clinton and in Barack Obama’s White House, is a major fan of UFO theories “He has made me personally pledge we are going to get the information out,” Clinton said. “One way or another. Maybe we could have, like, a task force to go to Area 51.”

This email discusses UFO disclosure and mentions amnesty for those who agree to come forward with the truth.

Thanks for your support. We will keep at it.

I am proud of your continued efforts to disclose the truth of secret UFO files hidden from the public. I will be voting for Hillary Clinton to help get you the authority you need to obtain disclosure.

I hope history remembers your undaunting efforts to informing the American public about extraterrestrial visitation. I hope you can get into area 51 and other secret installations. Perhaps an official committee could be created, but unlike Project Blue Book you would look for the truth. Perhaps offer amnesty to those that come forward. Offer those who want to disclose UFO involvement a chance to be part of a great humankind awakening by detailing their activities.

My children are 2,3,and 5. I hope they grow up with a government that is open and honest about our place in the universe. The knowledge shared with our younger generation can serve as a spark for incredible human advancements.

Keep up the excellent Work!