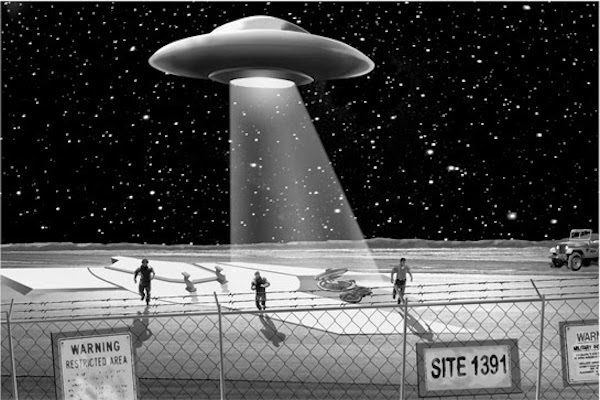 It was July 1st 1952 when Look magazine carried this story: “Flying Saucers- The Hunt Goes On” with the byline: “Fearful of danger from the skies, the United States Air Force is launching a secret search to discover once-and-for-all what is the mysterious, unbelievable thing Americans keep sighting overhead.”

At the time, the Air Force confirmed more than 800 sightings of flying saucers with reports from outposts all across the country, including “our vital atomic installation sites.” Atomic sites were specific areas of intense interests for the odd fast-moving saucers.

Flash forward 65 years: Interviews with U.S. military personnel validate the presence of strange UFO craft shutting down nuclear missile sites, turning the instruments off, inoperative, and overriding human controls. All of which is shocking to the nth degree!

Visitors from outer space obviously do not like nuclear stuff in the hands of humans. Otherwise, why focus on shutting down nuclear sites? Any force powerful enough to shut down nuclear weapon silos is so far beyond the capabilities of earthlings that they can dictate whatever they want. Still, why shut down missile sites? If “intention” is exposed by activity, then their message says nuclear power plants and nuclear weapons should go the way of the dodo bird.

A documentary film d/d July 2, 2017, UFOs and Nukes: The Secret Link Revealed by UAMN TV is fascinating, almost beyond belief.

There are many, many documentaries about UFOs but mostly ill conceived, unsubstantiated and horribly contrived. UAMN’s may be one of the only films that seems credible (hopefully, maybe) because of the quality of first-hand witness accounts and use of declassified military documents.

UFOs and Nukes: The Secret Link Revealed is a Robert Hastings film. He was born in Albuquerque, NM in 1950 at a military base where atomic weapons were engineered. His father served in the USAF. From 1966-67, the family stationed at Malmstrom AFB, Montana. During one particular incident of UFO activity over a Minuteman missile site, Hastings personally witnessed five UFOs tracked on radar at base air control. That experience led to a lifetime of research. The film’s message comes thru very clearly. Humans should not be messing around with nuclear power. Didn’t Einstein also say that?

ICBM launch officers from the 1960s and 1970s have come forward with Encounters of the Third Kind, stating that UFOs hovered over launch facilities as ICBMs suddenly malfunctioned, unable to launch or react to commands by human operators. Additionally, ground level security guards made panicky calls to underground mission control officers, informing them of the presence of unidentified circular craft maneuvering in the sky above ICBM launch silos.

In September 2010 several high-ranking retired military officers came forth in Washington, D.C. to discuss these encounters, as follows:

Captain Robert Salas, U.S. Air Force retired- in 1967 he was a first lieutenant stationed at Malsmtrom Air Force Base in Montana as a missile launch officer. On March 24th a ground-based security guard called Capt. Salas to report, whilst screaming into the phone, that a red glowing object was hovering over the front gate. Immediately thereupon, the ICBMs locked into a “no-go” condition, as if a magical wand waved across the sky, shutting down the ICBMs.

Lt. Col Dwynne Arneson, retired USAF in 1967, was officer in charge of the Air Force communications center at Great Falls, Montana. In March he received a message from a junior officer that hovering UFOs had shut down missile launch operations.

Captain Bruce Fenstermacher, USAD retired from Warren AFB Wyoming 1976. Security guards reported a 50′ long cigar-shaped white object hovering in the sky. When Capt Fenstermacher later met with the security guard, he was in the fetal position and could not be calmed down.

The Freedom of Information Act revealed documents confirming, as early as December 1948, UFOs were sited at Los Alamos, the birthplace of nuclear weapons. That same lab tested the first atomic bomb only three weeks before dropping the atomic bomb on Japan. The documents claim that UFOs consistently appeared in the area. The Oak Ridge Nuclear Lab in Tennessee also experience UFOs, as did the Hanford Processing Plant in Washington State, and so did the Savannah River Complex, a plutonium-manufacturing site in South Carolina.

UFO sightings began to occur in earnest at U.S. missile sites as early as 1962. Lt Col Philip Moore, USAF retired Walker AFB was in command at missile Complex Seven in charge of a launch crew for ICBMs. His ground crew reported a bright light above Site Six that rapidly accelerated, instantly stopped, and instantly changed directions, nothing like they had ever witnessed before.

Every ICBM base in the U.S. reported incidents of objects hovering over missile facilities. Often, USAF personnel tracked the UFOs on radar, performing maneuvers vastly beyond manmade capabilities. Radar operators were stunned as the objects flew at speeds of thousands of MPH, made sharp angled turns, and instantly stopped in mid air. Air Force interceptors chased some of the objects in futile attempts.

At Vandenberg AFB in 1967 Dr. Robert Jacobs (lieutenant at the time) said he witnessed a UFO intercept and destroy a test ICBM flight. He filmed the missile launches with a telescopic camera. A dummy warhead at speeds of 5,000-6,000 MPH was shot four times and destroyed by a UFO that he captured on film. The CIA captured his film.

Before the CIA took the film, Jacobs’ superior officer Major Mansmann, using a magnifier, studied the film in detail frame-by-frame. Here’s what he saw: The shape was a classic disc with a raised bubble in the center. The entire lower saucer glowed, and it rotated slowly. As it shot beams of light at the USAF dummy warhead, the saucer first positioned itself to aim and shoot, happening at speeds of 6,000 MPH.

In another close encounter, USAF Capt. Jay Earnshaw at Warren AFB WY in 1965 was in command of the site. The security control officer called him to report strange objects, 5 to 6 oblong lights hovered above the gate. Meantime, missile launch sites at N. Dakota and S. Dakota reported similar incidents.

Maj Gaylan King, USAF retired Ellsworth AFB SD in 1966 reported a saucer hovering over his missile site with a reddish light beaming down at the missile.

Capt. David Schindele, Minot AFB ND in 1966 reported an object 80′-100′ in diameter sighted around his missile launch pads. All of his missiles went off “alert status” and shutdown as the object hovered.

Furthermore, according to Hasting’s web site, as recently as October 2012, multiple UFO incidents occurred at ICBM sites in Montana.

Not only that, the world community already knows that deadly out of control nuclear power destroys people in bunches sans war. Chernobyl (1986) is the A-Team primo example of how that works, as 800,000 healthy Russian and Ukrainian Chernobyl “liquidators” (average age of 33-yrs) worked to control the meltdown. Over 120,000 have died with another 30%-40% disabled for life with chronic illnesses and genetic and perigenetic permanent damage to their descendants. Yes, radiation damage is passed on from generation to generation to generation.

Furthermore, Chernobyl is an example of nuclear radiation accidents bringing heartache and harm to innocent citizens who happened to be in the wrong place at the wrong time. There are 2,397,863 people registered with Ukraine’s health ministry to receive ongoing Chernobyl-related health care. Of these, 453,391 are children – none born at the time of the accident. Their parents were children in 1986. These children have a range of illnesses: respiratory, digestive, musculoskeletal, eye diseases, blood diseases, cancer, congenital malformations, genetic abnormalities, trauma.” (Source: “Chernobyl’s Kids With Bodies Ravaged By Disaster”, USA Today, April 17, 2016)

Meantime, Rocketman’s ICBMs and nuclear warheads (North Korea) grow ever more real and threatening, as the Leader of the Free World (Trump) and The Great Leader (Kim Jong Un) occasionally exchange babyish words of wisdom, a bit of an oxymoronic undertaking.

Judging by Japan’s 70-year experience with nukes and the ongoing generation-by-generation-by-generation damage and destruction to Chernobyl survivors, it appears UFOs may be onto something when they manipulate nuclear warheads, dead stop, but then again, what about the credibility of all of the retired military officers who spoke up about UFOs hovering over ICBM missile sites? Are military officers in charge of top-secret military installations that contained enough nuclear power to blow parts of Earth to smithereens credible witnesses?

You’ve gotta wonder what’s going on and are UFOs sending a message?