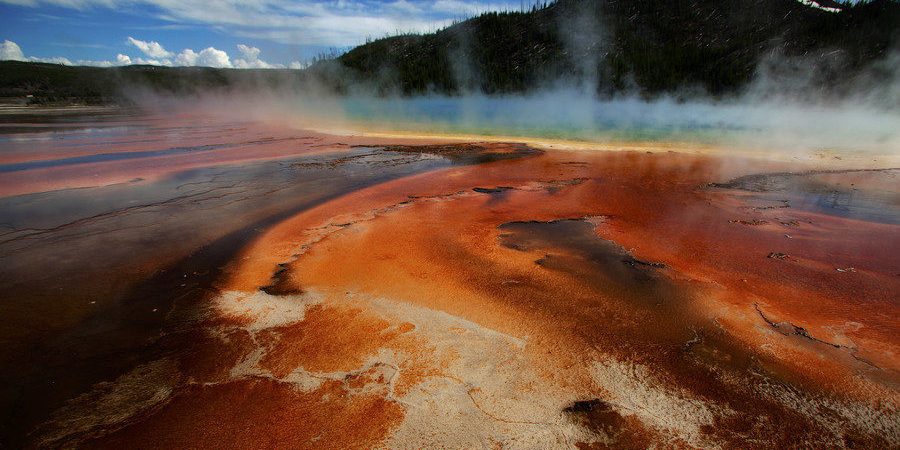 Yellowstone Super Volcano is Under Strain, and it’s Measurable

Yellowstone Caldera Chronicles is a weekly column written by scientists and collaborators of the Yellowstone Volcano Observatory. This week’s contribution is from David Mencin and Glen Mattioli, geodesists with UNAVCO, Inc., in Boulder, Colorado.

We all know what it is like to experience strain. The pressures of everyday life can leave you feeling contorted and stretched. Volcanoes are no different — they experience strain as well, and measuring that strain can help scientists understand a volcano’s activity.

Unlike you, when a volcano experiences strain it contorts or stretches. The very subtle change in shape of subsurface rock is called deformation. It can be caused by a variety of forces, including changes in magma pressure or even in the amount of water in lakes at the surface. But how can you tell how much strain a volcano is experiencing? Fortunately, the Yellowstone Volcano Observatory consortium includes UNAVCO, Inc. as a member organization, and they are experts at measuring strain.

UNAVCO, Inc., is a nonprofit university-governed consortium headquartered in Boulder, Colorado. Scientists there are responsible for operating and maintaining equipment for measuring ground movement (deformation) at Yellowstone and throughout the western United States. Some of the tools used for this type of monitoring include the Global Positioning System, borehole tiltmeters, and borehole strainmeters. Borehole strainmeters are particularly sensitive to deformation of the ground surface, and so have an important role to play in monitoring activity of Yellowstone.

To detect strain within the subsurface, scientists measure the change in diameter or volume of a strainmeter — an extremely sensitive instrument that is permanently grouted in a borehole. At Yellowstone, strainmeters are installed from 100 to 250 meters (328 to 820 feet) below the surface. Borehole strainmeters can detect changes on the order of four picometers — that’s about one ten millionth of the width of a human hair and smaller than the width of a hydrogen atom!

Sometimes these tiny strain measurements yield big surprises. For example, Yellowstone strainmeters are sensitive enough to record surface waves on Yellowstone Lake. Here’s the surprising part: the strainmeters are hundreds of feet deep and up to 12.5 miles away from the lake, yet these water waves can tell us something about Yellowstone’s deep volcanic plumbing system.

It’s not that Yellowstone’s magma affects the water waves directly, but rather that magma in the crust affects the way the waves are measured at the strainmeters — the strain signal is larger than would be expected if the crust under Yellowstone were completely solid. Computer simulations show that a zone of magma under the caldera would amplify the wave motion — that’s exactly what is measured by the strainmeters. These independent observations agree with other instruments at Yellowstone, like seismometers, that indicate a zone of semi-molten rock starting about 3 miles beneath the surface. We say semi-molten because the entire zone contains only between 5 and 15 percent liquid rock that occupies small pockets of space between solid rock.

These findings are no cause for alarm. The measurements and the models that are based on them are examples of how sensitive instruments located on and just below the Earth’s surface are helping us learn more about the deep secrets of Yellowstone and other volcanoes. 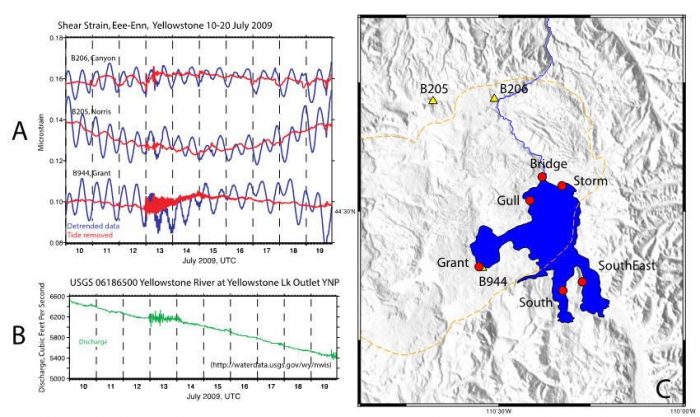 More information about Borehole Strainmeter Data Products can be found on UNAVCO’s website.