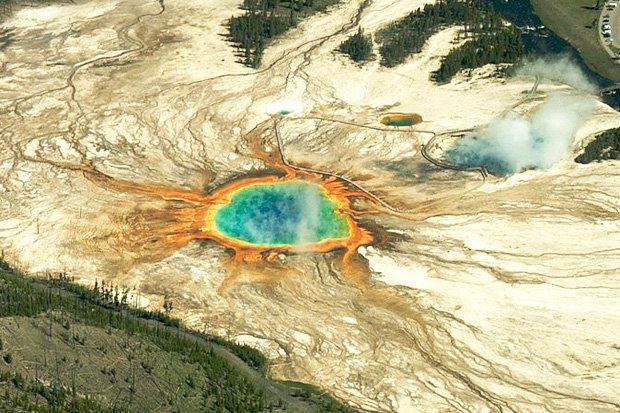 A SWARM of 10 earthquakes have struck Yellowstone National Park – the site of a supervolcano capable of an apocalyptic eruption.

A raft of earthquakes measuring above magnitude-2.0 have been recorded at Yellowstone, in the US state of Wyoming, during the past 24 hours.

The largest earthquake measured 2.9 on the Richter Scale and struck at a depth of 9km at around 6am on Sunday.

Though fairly small, the flurry of seismic activity at the 3,500-square mile volcanic hotspot highlights the unstable nature of the landscape.

All of the earthquakes struck near Hebgen Lake in western Yellowstone, home to gushing geysers, dramatic canyons and a dangerous underground volcano.

Seismic activity is relatively common at Yellowstone and the magma chamber underneath is not thought to be at risk of an imminent eruption. 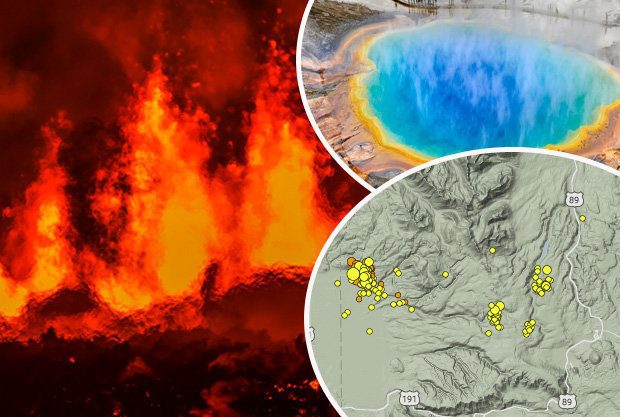 SEISMIC UPTICK: Yellowstone has been rocked by 10 earthquakes in the past 24 hours

Around 1,500 to 2,000 earthquakes of varied sizes strike the region every year.

But research shows high levels of seismic activity could be a precursor to an eruption.

Dr Simon Day, from the Institute for Risk and Disaster Reduction at University College London, said the next eruption will “likely be preceded” by an earthquake swarm.

Speaking to Daily Star Online, the scientist stressed that it is “highly unlikely” one seismic swarm could lead to an massive eruption.

More likely, he said, is a sequence of small eruptions.

Around 640,000 million years ago, Yellowstone blew its lid, creating a giant sunken crater around the size of 726,000 football pitches.

If a massive eruption were to occur again, a choking veil of magma and gases would spew from its chasm, covering the landscape in molten ash.

As many as 90,000 people could be killed in the initial explosion, according to estimates from disaster analysts.

Research from geologists monitoring Yellowstone suggests “strain signal” caused by the build up of flowing magma is “larger than would be expected”.

UNAVCO, non-profit body of geoscience researchers, published a study stating “a zone of semi-molten rock” has started to develop three miles beneath Yellowstone.

The findings, however, are “no cause for alarm”, scientists David Mencin and Glen Mattioli said in the paper.

The measurements of magma are consistent for a volcano which has been building up for close to a million years, they said.

Volcanologist Stefano Carlino, of National Institute of Geophysics and Volcanology, said it is “hard to assess” the magnitude of an eruption at Yellowstone.

He said that research shows only 2% of “the deep magmatic system is melted” – a “crucial” indicator of how close Yellowstone is to eruption.

He told Daily Star Online: “Without new magma input, and giving the present state of the caldera, the possibility of an eruption is extremely low, in my opinion.

“As regard the magnitude of the potential eruption, is very hard to assess it, but, in general, the probability of smaller eruption occurrence is higher in respect to large one.”