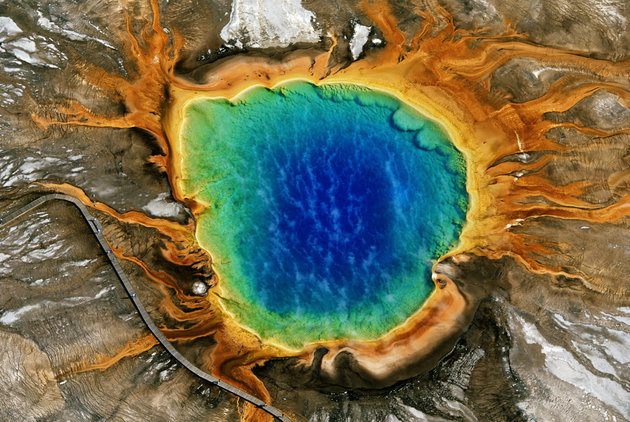 All those years playing “the floor is lava” could finally pay off.

You probably don’t spend a lot of time thinking about the “supervolcano” lurking beneath Yellowstone National Park, but should that behemoth decide to erupt, it would be nothing short of catastrophic.

By some estimates, 87,000 people would die almost immediately, and two-thirds of the United States would be left uninhabitable.

A new study, however, suggests we humans might have a fighting chance after all — if, that is, we’re in good running shape.

Researchers looked at the pyroclastic flows — a fast-moving mix of lava, ash and volcanic gas — following a super-eruption in Arizona 18.8 million years ago, and discovered that they moved much slower than many experts previously thought.

The recent findings have sparked a debate within the scientific community, raising questions about whether people in the immediate area of such a cataclysmic event would stand any chance of escape.

“I wouldn’t recommend anyone try to outrun a volcano,” study co-author Greg Valentine, a volcanologist at the University at Buffalo in New York, told Live Science. “But there’s a few of us that could.”

For their study, published Monday in the journal Nature Communications, Valentine and his team focused on an ancient eruption at Silver Creek caldera, in western Arizona. According to the UB Reporter at the University of Buffalo, when this supervolcano blew its top 18.8 million years ago, it flooded parts of California, Nevada and Arizona with pyroclastic flows. Some flows traveled more than 100 miles from their source, according to the study.

By looking at rocks in the ancient volcanic deposit, the researchers determined that the flows from the Silver Creek eruption reached “modest and uniform” speeds of around 10 to 45 mph. In comparison, flows during the 1980 eruption of Mount St. Helens, which killed 57 people, were clocked at around 380 mph, according to the study.

Valentine told the UB Reporter that understanding the behavior of ancient flows could help experts do a better job of forecasting and preparing for future volcanic disasters. “The character and speed of the flows will affect how much time you might have to get out of the way, although the only truly safe thing to do is to evacuate before a flow starts,” he said.

But some are skeptical of the recent findings.

Charles Ferguson, an expert on the ancient Arizona flow and a research geologist with the Arizona Geological Survey, told Live Science that there are outcrops that suggest the ash moved quickly and energetically. “I think their hypothesis is more problematic than explanatory,” Ferguson said of Valentine and his team.

While the average person can run about 15 mph, a 2010 study found that, in theory, humans have the potential to reach up to 40 mph. Whether you’re John Doe or Usain Bolt, it’s probably a good idea to high-tail it away from an erupting supervolcano — at least as far as the nearest working vehicle.