You Might Refuse to Believe this “Curvature Blindness” Illusion

A new optical illusion has been discovered, and it’s really quite striking. The strange effect is called the ‘curvature blindness’ illusion,and it’s described in a new paper from psychologist Kohske Takahashi of Chukyo University, Japan.

Here’s an example of the illusion: 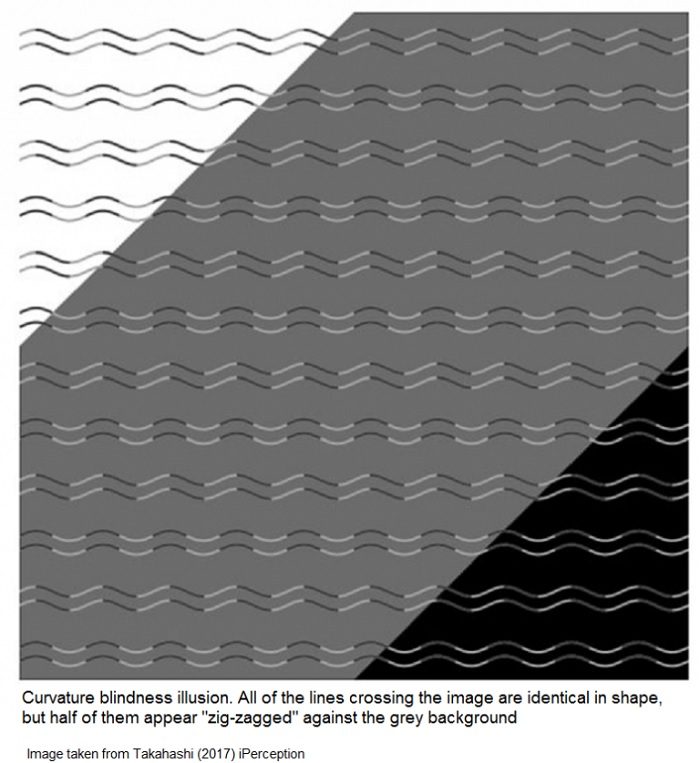 A series of wavy horizontal lines are shown. All of the lines have exactly the same shape – a sine curve. However, half of the lines appear to have a much more triangular, “zig-zag” shape, when they are superimposed on a grey background. This “zig-zag” appearance is an illusion. (I checked – it really is.)

Takahashi notes the unusual strength of this effect:

As the effect magnitudes are quite strong, unless one carefully stares at the region that looks like a corner, it is hard to find that all lines are physically wavy. Despite the simplicity and effect magnitudes, to the best of our knowledge, no one has reported about this phenomenon.

So what’s going on here? Takahashi proposes that the brain’s visual system may default to seeing corners when there ambiguity over whether a line is a smooth curve or not:

The “zig-zag” lines in the illusion are the ones in which the color of the wavy line changes from dark grey to light grey at the ‘corners’ i.e. the peaks and troughs of the curve. It is only seen against a medium grey background however, suggesting that what matters is that the color of the wavy lines shifts from being lighter than the background, to being darker than it.

Takahashi notes that the illusion involves a sense of depth: the “zig-zag” lines look a bit like a surface, or wall, going into and out of the page, and the changing color of the wavy line suggests shadows. However, further experiments revealed that depth perception is not the driving force behind the effect.