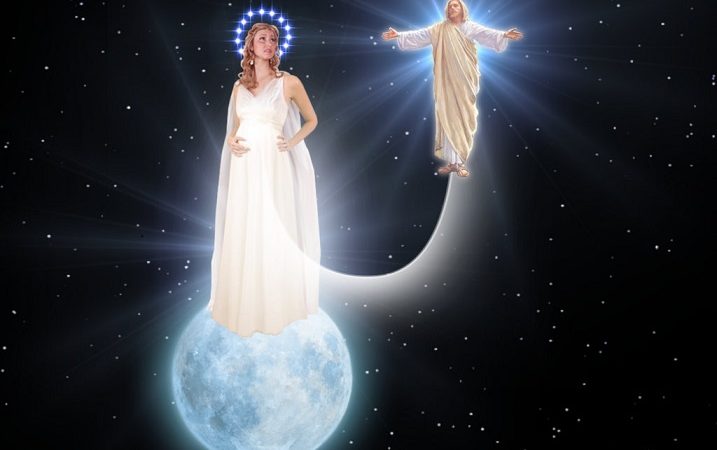 Revelation chapter 12 is a pivotal point in the realm of future prophecy and should be interpreted properly, especially the identity of the woman described in the first, two verses:

Revelation 12:1-2, “And there appeared a great wonder in heaven; a woman clothed with the sun, and the moon under her feet, and upon her head a crown of twelve stars: (2) And she being with child cried, travailing in birth, and pained to be delivered.”

Both of these two “Jerusalems” are mentioned in Galatians 4:22 – 26 together as follows:

“For it is written, that Abraham had two sons, the one by a bondmaid, the other by a freewoman. (23) But he who was of the bondwoman was born after the flesh; but he of the freewoman was by promise. (24) Which things are an allegory: for these are the two covenants; the one from the mount Sinai, which gendereth to bondage, which is Agar. (25) For this Agar is mount Sinai in Arabia, and answereth to Jerusalem which now is, and is in bondage with her children. (26) But Jerusalem which is above is free, which is the mother of us all.”

At this present time, Heavenly Jerusalem in the 3rd Heaven is composed of good angels as the majority, but evil angels are interspersed among them until they get cast out in the war in heaven in Revelation 12:7-9. The chronology of that event will be the middle of the 70th Week of Daniel – half way through his 70th Week. It will also chronicle the start of the Great Tribulation, which will last for 3 ½ years.

Following that event, “Heavenly Jerusalem” will be called “New Jerusalem” because her evil angels will have been cast out.

Revelation 21:1-2, “And I saw a new heaven and a new earth: for the first heaven and the first earth were passed away; and there was no more sea. (2) And I John saw the holy city, new Jerusalem, coming down from God out of heaven, prepared as a bride adorned for her husband.”

According to Jesus Christ, “Jerusalem on earth,” is made up of Jews of National Israel. Matthew 23:37, “O Jerusalem, Jerusalem, thou that killest the prophets, and stonest them which are sent unto thee, how often would I have gathered thy children together, even as a hen gathereth her chickens under her wings, and ye would not!”

True Jews received their first birth from their parents, who were part of earthly Jerusalem, or National Israel, but after they believed on Jesus Christ as their Messiah they became eligible for their 2nd birth, which is spiritual, from their heavenly mother – heavenly Jerusalem of Revelation 12.

Heavenly Jerusalem will give second birth to the Jewish calling of Firstfruits as the “man child.” We can see them with Jesus Christ on mount Zion of “Heavenly Jerusalem” later in Revelation 14:1, 4, 5, “And I looked, and, lo, a Lamb stood on the mount Sion, and with him an hundred forty and four thousand… (4) …These were… the firstfruits unto God and to the Lamb. (5) … they are without fault before the throne of God.”

Notice that the “Firstfruits” or “man child” will have been “caught up” to stand before God’s throne by the time of Revelation 14 as follows: Revelation 12:5, “And she brought forth a man child, who was to rule all nations with a rod of iron: and her child was caught up unto God, and to his throne.”

This will be the reason for the “War in heaven,” because Satan and his Angels presently occupy part of the 3rd heaven, but will be cast out as follows: Revelation 12:7-9, “And there was war in heaven: Michael and his angels fought against the dragon; and the dragon fought and his angels, (8) And prevailed not; neither was their place found any more in heaven. (9) And the great dragon was cast out, that old serpent, called the Devil, and Satan, which deceiveth the whole world: he was cast out into the earth, and his angels were cast out with him.”

Since the devil and his angels presently occupy part of the 3rd heaven, they will resist being replaced by the “Firstfruits” and being cast out into the earth, which event will start the period of the Great Tribulation, which will last 3 ½ years during the last half of Daniel’s 70th Week.

Note: no one today is presently being saved by works, but everyone during the time of end time prophecy will be saved that way. This is quite complex and requires adherence to Daniel 9:24 where the Angel Gabriel plainly tells Daniel that 70 weeks [of years] must be fulfilled before Jesus Christ’s work on the cross can be applied to Israel.

Daniel 9:24, “Seventy weeks are determined upon thy people and upon thy holy city, to finish the transgression, and to make an end of sins, and to make reconciliation for iniquity, and to bring in everlasting righteousness, and to seal up the vision and prophecy, and to anoint the most Holy.” Note: this Scripture means what it says and says what it means and applies to National Israel and not to the Church today as our sins have already been forgiven. Ephesians 1:7, “In whom we have redemption through his blood, the forgiveness of sins, according to the riches of his grace;”

But again, this won’t come back into effect until millions of members of the Male Body of Christ, the Church today, have departed to be with Christ when future prophecy will resume at the point where it left off some 2,000 years ago when God’s prophetic clock stopped due to Israel’s falling away.

As for the current Israel being approved to become a state by the UN General Assembly in 1948, that has nothing to do with the Nation of Israel of the Bible, which cannot be in favor with God without a Temple. The mandatory offering of the “Daily Sacrifice” can’t be done without a Temple and failure to do it renders Israel “Lo Ammi,” or “Not God’s people.” Even if they had been restored on May 14, 1948, they would have gone back out of God’s favor the very next day because they had no Temple to perform the numerous, required sacrifices.

Today, most people get this mixed up as they think part of Daniel’s 70th Week is being fulfilled. Sir Robert Anderson, Head of Scotland Yard’s Criminal Investigative Division, made it perfectly clear in his book, “The Coming Prince,” that the event which will mark the beginning of the fulfillment of the 70th Week will be the confirmation of the Peace Treaty between Israel and the “Beast.” Needless to say, such an event hasn’t occurred yet, not to mention the fact that Israel hasn’t confirmed the Peace Treaty with the “Beast.” Cf. Daniel 9:27

This subject is quite comprehensive and details of the remainder of Revelation 12 and the rest of future prophecy may be seen at http://www.godlydata.com/?page_id=2364 and other pages on that website.