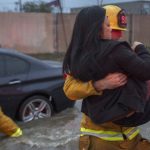 Torrential downpours were inundating Southern California on Friday, flooding streets and prompting water rescues. Officials said at least two people had died in the storm. One was found in a vehicle that was under water. Here are the latest developments from one of the worst storms in the area in recent memory: A motorist in Victorville was found dead when … Continue reading → 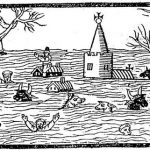 Massive Flooding In Europe During The Last ‘Little Ice Age’

Caption for Headline Pic Above: Woodcut from a contemporary pamphlet (chap book) depicting the aftermath of the 1607 flood in the coastal lowlands of the Bristol Channel and Severn Estuary. Intense flooding in the low countries of Europe became “darkly repetitive” during the Little Ice Age, writes McKillop. The cooling period lasted 450 years. For the Dutch, the Grote Mandrake … Continue reading → 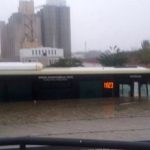 Severe flash flooding in southern Spain has has left one woman dead and forced authorities to issue a ”red alert”, the country’s highest public safety warning. Around 100 cubic metres of rain are estimated to have fallen within 28 hours. The 26-year old victim is said to have been in the basement of a nightclub during the deluge. A friend … Continue reading → 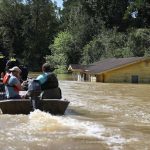 A total of 11 people have now been killed in the devastating Louisiana floods, the governor said on Tuesday, and at least 40,000 homes were damaged. Giving a stark assessment of the widespread disaster, Gov. John Bel Edwards spoke at a news conference alongside FEMA administrator Craig Fugate, saying ‘well over’ 20,000 people have been rescued since the flooding began … Continue reading → 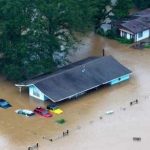 At least three people have died and thousands have been rescued after “historic” flooding swamped the US state of Louisiana. The National Guard and emergency teams have used helicopters to rescue people stranded in their homes or cars. Searches are continuing for missing people, as the rain is expected to continue over the weekend. The heavy rainfall started on Friday … Continue reading →