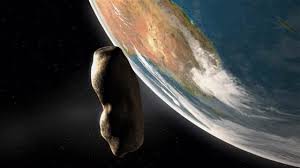 We can all breathe a sigh of relief. A 100-foot wide asteroid whizzed by the Earth on Monday night and (obviously) avoided a collision with our fair planet.

Asteroid 2013 TX68 made its closest approach to Earth at about 7 p.m. ET Monday, according to Laurie Cantillo, a spokeswoman for NASA.

NASA originally said the yacht-sized asteroid would fly by on March 5, but additional data allowed NASA’s Center for Near-Earth Object Studies Propulsion Laboratory (CNEOS) to “get a better handle on its orbital path” and predict that it would pass on March 8.

The reason for the vast range? The asteroid could only be tracked for a short time after it was discovered on Oct. 6, 2013, according to NASA.

“There is no concern whatsoever regarding this asteroid — unless you were interested in seeing it with a telescope,” Paul Chodas, manager of CNEOS, assured worried Earthlings in February.

NASA has not yet determined how close TX68 came to Earth, but Rob Landis, a program officer at NASA headquarters, said if the night sky was clear in the west and over Hawaii, NASA should be able to “nail down the orbit.”

The asteroid is currently moving away from Earth, Landis told NBC News.

TX68 has zipped by Earth before, about two years ago, at a distance of about 1.3 million miles, NASA reported.

The asteroid is about 100 feet in diameter, according to NASA. Comparatively, the asteroid that broke up over Chelyabinsk, Russia, three years ago — damaging buildings and injuring more than 1,000 people — was 65 feet wide. “If an asteroid the size of 2013 TX68 were to enter Earth’s atmosphere, it would likely produce an air burst with about twice the energy of the Chelyabinsk event,” NASA said.

The asteroid is expected to fly by Earth three more times on Sept. 28, 2017, in 2046 and in 2097. NASA originally said that TX68 “could impact” earth during the 2017 flyby, but additional data observed last month allowed CNEOS to determine that this particular asteroid “cannot impact Earth over the next century.”

“The risk — as we understand it right now — is minimal is probably on the order of 1-in-300 million or so,” Landis said.

And for further peace of mind: “Right now — we are not tracking any asteroid or comet on a path to strike the Earth,” Landis said. – NBC