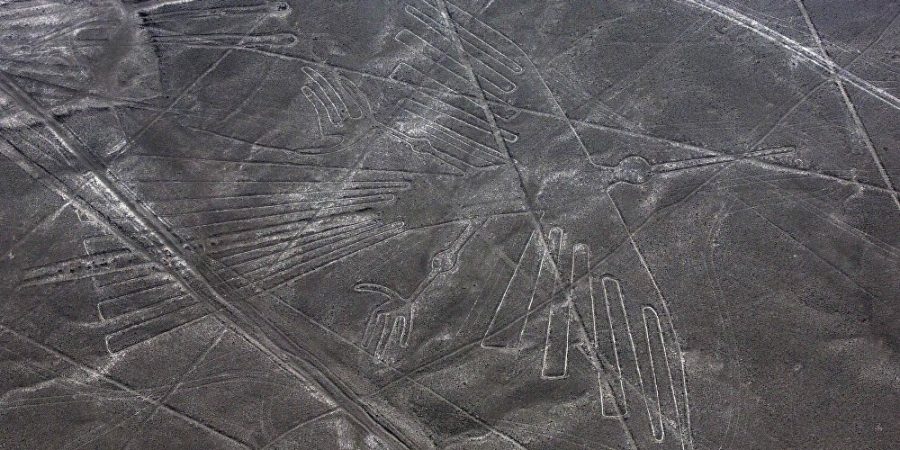 Located about 400 km south of Lima, the mysterious lines and geoglyphs of the Nazca Desert have fascinated scientists for nearly a century, and been designated a UNESCO World Heritage Site to ensure their protection.

The geoglyphs, compiled over the course of over three years through the careful examination of the faint outlines of the patterns, were revealed at a presentation on Friday.

The 143 new images, ranging from just five meters to 100 meters in size, include a mysterious humanoid, a square-headed creature, along with various animals, including what appear to be cats, massive two-headed snakes, fish and even what looks like a dinosaur, with the newly-found geoglyphs said to have been created between 100 BC and 300 AD.

A newly discovered geoglyph, left, in Peru's Nazca Lines has human form. The image, right, offers a clearer picture of what it depicts. The black rule at the bottom of the photo shows it is 4 meters wide. https://t.co/mqkPGwOQM8 pic.twitter.com/mV3IZOTZOh

IBM-powered machine-learning technology was said to have been used in the study to process satellite data.

Researchers say the next step will be to compile a geographic distribution of the images, and, crucially, an analysis of what may have driven ancient peoples to create them.

The first recorded mention of the mysterious lines and figures of the Nazca Plateau was provided in the 16th century by Spanish conquistadors, who believed the geoglyphs may have served as some sort of wayside marker. In the 20th century, Peruvian and world scholars including archaeologists such as Dr. Toribio Mexta Xesspe used fledgling aerial surveying technology to reveal their existence to the world.

Scientists have yet to reach a consensus on the mysterious geoglyphs’ origins and purpose, as well as how the region’s ancient Nazca peoples created them in the first place, given their limited technological capabilities. Some speculate that the geoglyphs may have been a form of ancient astronomy, while others assume they may have been meant as a gift to the deities, or a good luck symbol ensuring a safe long-distance journey. More outlandish speculation has even included claims that alien creatures from other planets created the geoglyphs, or instructed human beings on how to do so. But despite all the speculation, no conclusive reason for the enigmatic images has been agreed upon.

Even after decades of careful research, new Nazca geoglyphs continue to be found to this day, with some 50 discovered just last year.