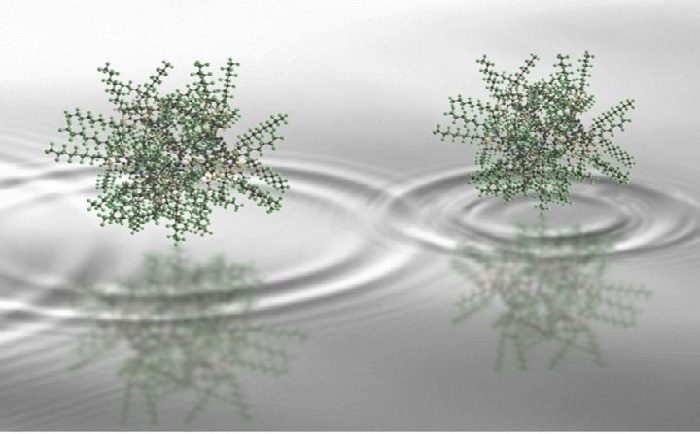 2,000 Atoms Exist in Two Places at Once in Mind-Bending Quantum Experiment

An illustration suggests the behavior of big, complex molecules spreading out like ripples across space.
© Yaakov Fein, Universität Wien

The new experiment demonstrated a bizarre quantum effect from the double-slit experiment at an unprecedented scale.

Giant molecules can be in two places at once, thanks to quantum physics.

That’s something that scientists have long known is theoretically true based on a few facts: Every particle or group of particles in the universe is also a wave — even large particles, even bacteria, even human beings, even planets and stars. And waves occupy multiple places in space at once. So any chunk of matter can also occupy two places at once. Physicists call this phenomenon “quantum superposition,” and for decades, they have demonstrated it using small particles.

But in recent years, physicists have scaled up their experiments, demonstrating quantum superposition using larger and larger particles. Now, in a paper published Sept. 23 in the journal Nature Physics, an international team of researchers has caused molecule made up of up to 2,000 atoms to occupy two places at the same time.

To pull it off, the researchers built a complicated, modernized version of a series of famous old experiments that first demonstrated quantum superposition.

Researchers had long known that light, fired through a sheet with two slits in it, would create an interference pattern, or a series of light and dark fringes, on the wall behind the sheet. But light was understood as a massless wave, not something made of particles, so this wasn’t surprising. However, in a series of famous experiments in the 1920s, physicists showed that electrons fired through thin films or crystals would behave in a similar way, forming patterns like light does on the wall behind the diffracting material.

If electrons were simply particles, and so could occupy only one point in space at a time, they would form two strips, roughly the shape of the slits, on the wall behind the film or crystal. But instead, the electrons hit that wall in complex patterns suggesting the electrons had interfered with themselves . That is a telltale sign of a wave; in some spots, the peaks of the waves coincide, creating brighter regions, while in other spots, the peaks coincide with troughs, so the two cancel each other out and create a dark region. Because physicists already knew that electrons had mass and were definitely particles, the experiment showed that matter acts both as individual particles and as waves. 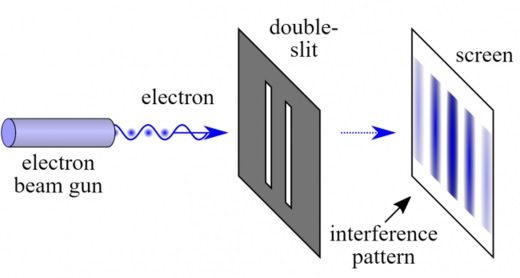 © Johannes Kalliauer/CC BY-SA 4.0
An illustrations show how electrons, particles of matter, act like waves when they pass through a double-slitted sheet.

To pull off the double-slit experiment for big things, the researchers built a machine that could fire a beam of molecules (hulking things called “oligo-tetraphenylporphyrins enriched with fluoroalkylsulfanyl chains,” some more than 25,000 times the mass of a simple hydrogen atom) through a series of grates and sheets bearing multiple slits. The beam was about 6.5 feet (2 meters) long. That’s big enough that the researchers had to account for factors like gravity and the rotation of the Earth in designing the beam emitter, the scientists wrote in the paper. They also kept the molecules fairly warm for a quantum physics experiment, so they had to account for heat jostling the particles.

But still, when the researchers switched the machine on, the detectors at the far end of the beam revealed an interference pattern. The molecules were occupying multiple points in space at once.

It’s an exciting result, the researchers wrote, proving quantum interference at larger scales than had ever before been detected.

“The next generation of matter-wave experiments will push the mass by an order of magnitude,” the authors wrote.

So, even bigger demonstrations of quantum interference are coming, though it probably won’t be possible to fire yourself through an interferometer anytime soon. (First of all, the vacuum in the machine would probably kill you.) Us giant beings are just going to have to sit in one place and watch the particles have all the fun.