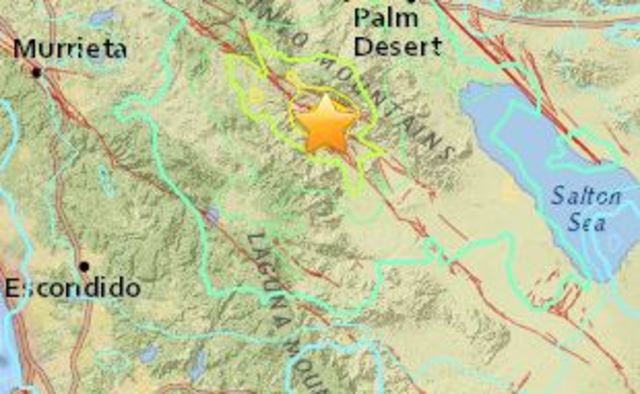 The quake is the largest to hit the region in some time, but it occurred in a sparsely populated area far from major cities. Still, the 1:04 a.m. quake was felt from San Diego to parts of L.A.

Although the quake was 13 miles from Borrego Springs, at a depth of 0.6 miles, it was reportedly felt hundreds of miles away, according to the U.S. Geological Survey.

Reflexively, hundreds of people turned to social media to share their experience and also verify that the quake really happened.

Why does the #earthquake always come while I'm sleeping , then I have to look on Twitter to make sure it wasn't a dream

Ron and Teri Walker were inside their hotel in Palm Springs when the room began to shake.

“We held each other, not sure what the next step was. What do we do?” Teri Walker told NBC4.

A Downey woman called KNX-AM (1070) and said it struck with “a soft roll,” then later “hit again stronger.” A caller from Costa Mesa described a “back and forth” sensation.

According to the USGS, the epicenter was 16 miles from La Quinta, 19 miles from Palm Desert and 20 miles from Rancho Mirage

There were several aftershocks, including a magnitude 3.3 jolt 13 miles from Anza, Calif., at 1:46 a.m. at a depth of 6.8 miles. Anza is in southern Riverside County.

Seismologist Lucy Jones reported dozens of aftershocks on her Twitter feed. She said the Friday morning quake was near the San Jacinto fault, “historically the most active fault in Southern California.”

There at least four magnitude 3.0 aftershocks and a fifth recorded as a magnitude 3.3, Jones tweeted.

A telltale sign that a quake is going to be large is how long it lasts, she said.

Bigger EQs last a longer time. If you feel 10+ sec of shaking, you know it is at least M5

The San Jacinto fault stretches for 130 miles, from the Cajon Pass in San Bernardino County southeast toward the Mexican border. The 1987 Superstition Hills earthquakes, which hit about 90 miles east of San Diego, topped out at magnitudes 6.5 and 6.7, and caused $3 million in damage in Imperial County.

According to the U.S. Geological Survey, a quake on the fault in 1918 caused significant damage and one death in San Jacinto.

Residents as far away as Porterville and Las Vegas went to the USGS website to report they felt pre-dawn quake.

Borrego Springs is a community of about 3,000 people in eastern San Diego County, near the Imperial County line, but the quake was felt throughout the Southland.

Video posted to YouTube shows cars in a driveway rocking for several seconds while a second video shows a chandelier swaying from the temblor.

There were no reports of damage.

The California Highway Patrol reported that boulders had fallen onto Highway 74 between Palm Desert and Pinyon, KESQ reported.

In the last 10 days, there have been two earthquakes of magnitude 3.0 or greater centered nearby.