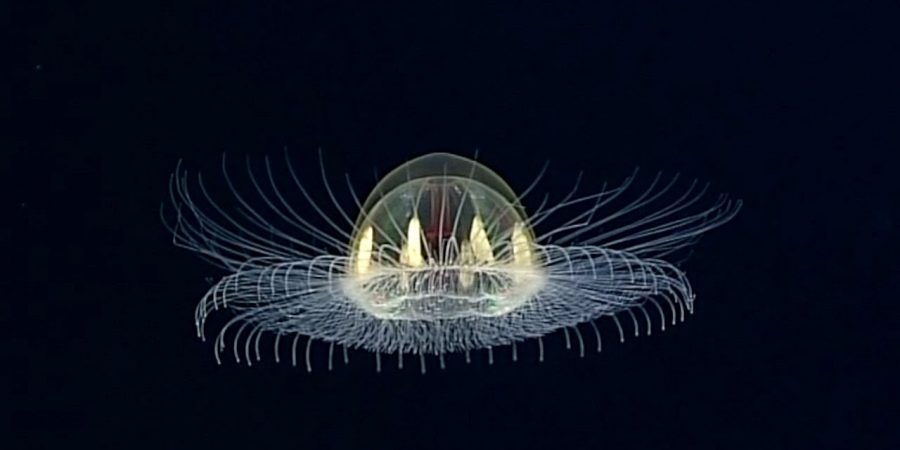 NOAA biologists have just completed a three-week expedition to the American Samoa region of the Pacific, and early footage coming out of their deep-sea dive has revealed some mind-boggling lifeforms from the darkest depths.

The team aboard the Okeanos Explorer research ship sent a remotely operated vehicle (ROV) to depths of almost 4 km (2.5 miles) to find creatures with bodies straight out of a sci-fi novel – including one particularly wacky fish that appears to walk on little stick-figure legs.

Finds included potentially dozens of never-before-seen species of sea stars, sponges, corals, and molluscs, plus a cosmic jellyfish that looks like it wants to land in a cornfield and abduct some humans, and bright pink Venus flytrap anemone that could have been ripped from the pages of Day of the Triffids.

“Much remains unknown about the deep-sea habitats and geology in and around these protected places,” NOAA team member Santiago Herrera told George Dvorsky at Gizmodo.

“This expedition will contribute new information by exploring areas of the deep ocean in American Samoa for the first time.”

Here are some of the craziest finds. 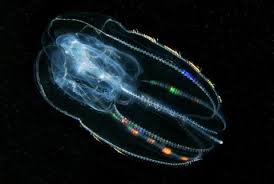 This one shocked even the NOAA staff watching live recordings of the Vailulu’u seamount – an active, underwater volcano that hosts life as unique as the conditions it creates in the deep Pacific.

According to the researchers, those bright Christmas lights running up and down the ctenophore’s body aren’t actually lights, but rows of cilia (hair-like growths).

As they’re tussled by the waves, these cilia refract light in rainbow hues that pierce the darkness as the animal moves through the water.

“A beautiful, but perhaps sinister, Venus flytrap anemone perched on top of a dead Iridogorgia coral, closes up as the remotely operated vehicle approaches,” the NOAA reports.

Herrera told Gizmodo these odd creatures wield stinging tentacles equipped with microscopic harpoons that inject venom into their prey as they’re tangled up in the bright pink ‘mouth’.

This ridiculously beautiful jellyfish belongs to the Rhopalonematidae family, known for having distinct canals running vertically along the inside of the bell, gonads attached to these canals, and sometimes two sets of tentacles.

Found in the Utu Seamount of the National Marine Sanctuary of American Samoa, this flying saucer jelly was found at a depth of around 3,000 m (9,842 feet), and appears to be super-chill and waiting for a feed, despite the fact that it’s being spied on by a giant robot.

2. Hydroid with an Unfortunate ‘Head’ 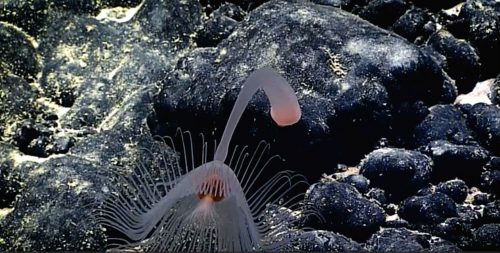 A solitary hydroid seen while exploring ‘Leoso’ seamount, which straddles the boundary between the American Samoa Exclusive Economic Zone (EEZ) and the Cook Islands EEZ at a depth of around 3,770 metres [12,368 feet].”

1. LOOK AT THIS FISH

Clearly our favourite of the bunch, this bizarre armored sea robin not only looks like it’s walking on two tiny stick-figure legs, but it’s also got horn-like projections on each side of its snout, branched barbels (or whiskers) in front of the mouth, and large, purple butterfly wings for fins.

“In sea robins, including the armored sea robin, the first few rays [of the fins] are free from the membranes of the rest of the fin and are very thick,” the NOAA explains. “The fish uses these thickened, stiff fin rays to ‘walk’ along the bottom.”

Walk on, little buddy. But not too fast, because you just stole our hearts.

You can see more images and footage from the dive at the NOAA website.