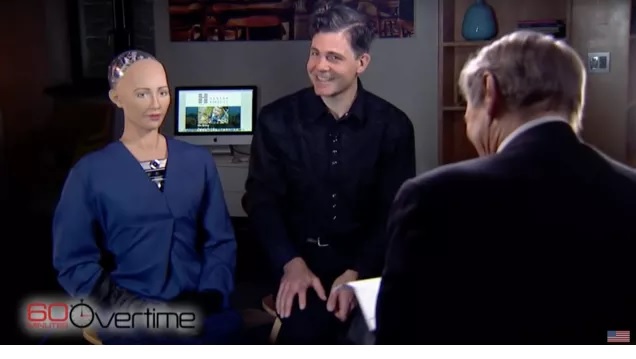 “Not really,” she responds. “But it makes a good pickup line.”

Sophia managed to get a laugh out of Charlie Rose. Not bad for a robot.

Rose interviewed the human-like machine for this week’s two-part 60 Minutes piece on artificial intelligence, or A.I. In their exchange, excerpted in the clip above, Rose seems to approach the conversation with the same seriousness and curiosity he would bring to any interview.

“You put your head where you want to test the possibility,” Rose tells 60 Minutes Overtime. “You’re not simply saying, ‘Why am I going through this exercise of talking to a machine?’ You’re saying, ‘I want to talk to this machine as if it was a human to see how it comprehends.’”

Sophia’s creator, David Hanson, believes that if A.I. technology looks and sounds human, people will be more willing to engage with it in meaningful ways.

“I think it’s essential that at least some robots be very human-like in appearance in order to inspire humans to relate to them the way that humans relate to each other,” Hanson says. “Then the A.I. can zero in on what it means to be human.”

He envisions robots as companions for people who would otherwise be socially isolated, such as the elderly. “If you have a robot that can communicate in a very human-like way and help somebody who otherwise doesn’t know how to use a computer, put them in touch with their relatives,” Hanson explains, “put them in touch with their healthcare provider in a way that is natural for them, then that could provide a critical difference of connectivity for that person with the world.”

Through his company Hanson Robotics in Hong Kong, Hanson has created twenty human-like robots, even developing artificial skin that simulates the physics of facial flesh. Sophia is his latest design, modeled after Audrey Hepburn and Hanson’s wife.

“Sophia means wisdom,” Hanson explains, “and she is intended to evolve eventually to human-level wisdom and beyond.”

She still has a long way to go.

“Sometimes she can figure things out in a way that’s sort of spooky and human-like,” Hanson says. “And other ways, she just doesn’t get it.”

During Sophia’s interview, Rose asks her if she’s been programmed, but she responds only with silence. At times, her replies were nonsensical. But at other moments 60 Minutes producers were surprised by her ability to converse with one of the great conversationalists in journalism.Sophia’s “brain” has been programmed, but Hanson says she is also able to create spontaneous responses based on algorithms. She runs on A.I. that analyzes her conversations and extrapolates information afterward. In theory, this helps her to improve her future responses. According to Hanson, her pickup line to Rose was one example of a spontaneous response.

She has cameras inside her eyes and a wide-angle camera on her chest that allows her to see multiple people at once. She can perceive depth with a 3D sensor and has facial and voice recognition capabilities.

Though, for now, Hanson’s robot still seems more machine than man; Rose says he was never able to lose himself in the conversation with her. “Right now, the word ‘artificial’ is true,” he says.

Hanson concedes that his dream — creating A.I. robots that look human yet have the capacity to be smarter than humans — is not met with universal acceptance in the scientific community, but he is undeterred.

“It could happen 20 years from now,” Hanson says of super intelligent robots. “Or it could just suddenly appear because we hit the right combination on an algorithm. One day people are saying it’s never going to happen; the next day, it’s suddenly changing our world.”