Researchers have known for a while that a star called Gliese 710 is headed straight for our Solar System, but they have now worked out precisely when it should arrive.

Gliese 710 is about half the size of our Sun, and is set to approach Earth in 1.35 million years, according to a paper published in the journal Astronomy & Astrophysics in November.

And when it arrives, the star could end up a mere 77 light-days away from Earth – one light-day being the equivalent of how far light travels in one day, which is about 16 billion miles (26 billion kilometres), the researchers worked out.

As far as we know, Gliese 710 isn’t set to collide directly with Earth, but it will be passing through the Oort Cloud, a shell of trillions of icy objects at the furthest reaches of our Solar System. 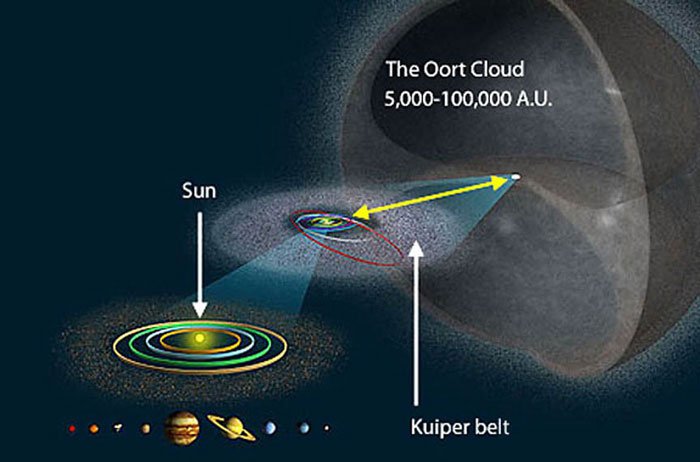 So although 77 light-days sounds like a relatively safe distance, the speeding star could burst through the cloud and shoot these icy objects and comets all around our Solar System.

Any one of these is pretty likely to collide with Earth.

“Gliese 710 will trigger an observable cometary shower with a mean density of approximately 10 comets per year, lasting for 3 to 4 million years,” write the authors.

The team, who hails from Adam Mickiewicz University in Poland, used measurements from the European Space Agency’s Gaia space observatory.

This new observatory is constructing the largest and most precise 3D space catalogue ever made, totalling approximately 1 billion astronomical objects, which means the data are 10 times more accurate than previous predictions.

There’s still an error rate of around 50 percent though, which means Gliese 710 could actually scrape past at a mere 40 light-days away.

Some scientists speculate that a similar event of a star passing through the Oort cloud triggered the asteroid that wiped out the dinosaurs around 65 million years ago.

However, the Gliese 710 event could make the dinosaur extinction look relatively minor.

At its closest distance, it will be the brightest and fastest observable object in the sky, and as the authors say in the paper, it will be the “strongest disrupting encounter in the future and history of the Solar System”.

But it’s also not the only galactic body to worry about. There are as many as 14 other stars that could come within a three-light-year distance to us any time over the next few million years.