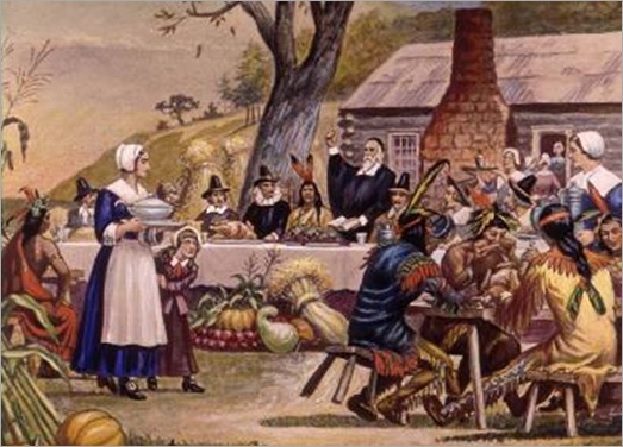 There are a lot of misconceptions out there about the Thanksgiving Holiday. Somehow, the old stories have blended or have been distorted, and the picture that we envision when we think about the first Thanksgiving is not a true picture at all. For every misconception, there is a fact. Maybe this will help replace some of those false pictures with the real ones.

Myth #1–Pocahontas helped the pilgrims. This is a myth that has been around for a long time. It is actually more of a misunderstanding than a myth. There were two groups of colonists settling in America in the early 1600s. One group was called the Pilgrims. They were religious separatists who had come to the New World to practice their own religion. They arrived in America in 1620. Pocahontas died in 1617; about the time the Pilgrims were deciding to make the voyage to America.

The truth behind the myth is that Pocahontas did help the other group of settlers. They arrived in America in 1607. During the winter of 1609/1610, they suffered from disease and starvation. Some of the local Indians came to help and Pocahontas was among them. She was just a child of about 12 when she first met the settlers and they enjoyed her charm and her energy. Although they enjoyed her and appreciated her, they did take her hostage at one point. She eventually married John Rolfe and traveled to England with him. She died on the return voyage in 1617 at the age of 22.

What the pilgrims did eat that we eat at Thanksgiving was turkey. There were plenty of turkeys in the area. One of the Pilgrims kept a journal in which he reported that there were enough birds killed to keep the whole company fed for a week. They also ate a lot of venison; the same journal reported that five deer were killed for meat. The other staple on the menu was cornmeal. They ground the corn from the harvest into a fine meal from which they made puddings and cornbread.

Myth #3–The Pilgrims celebrated Thanksgiving and we have been celebrating it every since. Actually, the first thanksgiving was not considered a holiday at all. It was a spontaneous party that resulted from a great harvest. The Pilgrims were thankful for the harvest and for the Indians who taught them how to plant and grow corn. The next year at harvest time there was no such party. In fact, the next year’s harvest wasn’t that great so there was not a lot of thankfulness that year.

Several governors of that time tried to institute a Thanksgiving Day but it didn’t really stick. The first President, George Washington, declared a national holiday to celebrate Thanksgiving but that didn’t stick either. It wasn’t until the 1860s, under the presidency of Abraham Lincoln, that Thanksgiving became a recognized holiday that was commonly celebrated. It was even later than that when the day that Thanksgiving was celebrated became the fourth Thursday of November.

It is interesting to look at the real history of Thanksgiving. If you study it, you might find that there are other surprises surrounding the holiday. For example, did you know that in Virginia, some people still celebrate Thanksgiving on 4 December? It’s true; they do.