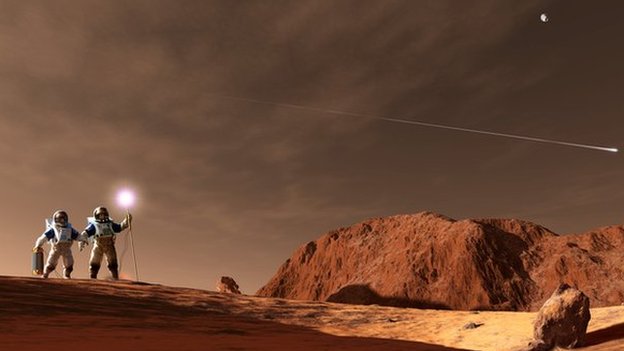 Many people who used to work for NASA revealed that NASA is trying to hide many thing from the general public. Based on the confession of a former NASA employee, people were seen walking on Mars.

According to statements from a former NASA employee, there were secret manned mission to Mars over 20 years ago. According to the women who has been nicknamed ‘Jackie’, she and six other employees saw the exact same thing, suggesting this might be the evidence that proves that a secret space program did exist ( or might even still).

According to ‘Jackie’ while working as part of the team downloading telemetry from the Viking Lander, she saw human setting foot on the surface of the red planet via a live feed from Mars.

In an interview with Coast-to-Coast AM, Jackie talked about humans on Mars, something that has been discussed among other alleged NASA employees for years.

‘I wonder if you could solve a 27-year-old mystery for me,’ she asked the presenter. ‘That old Viking rover was running around.

‘Then I saw two men in space suits – not the bulky suits we normally used, but they looked protective. They came over the horizon walking to the Viking Explorer.’

While NASA hasn’t bother talking about the alleged stories where mankind had already set foot on Mars, there are others who believe Jackie is speaking the truth and mankind has been on Mars for over 20 years now.

The Viking 1 and 2 spacecraft’s were launched in the 1970’s and were among the first official missions to explore the red planet.

‘The missions are faked to hide the real activity going on in outer space, which could include collaborating with aliens who already live on Mars.’

According to claims of a retired officer know as Captain Kaye (pseudonym), not only have humans made it to Mars in the past, but we have developed a secret space program and flotilla that operates in space. It seems that there are two versions that are being filtered to society when it comes to Space, Mars, and classified files relating the two. The first is that we have not been to Mars, there is a lot of work to be done and our technology is still very limited. The other one is the exact opposite, a version that several individuals have backed up over the last decade.

While speaking about Mars and the possibility that mankind has already set foot on the red planet we have to look back at the image of an alleged person repairing the Curiosity rover.

According to the alleged image, the shadow formed could belong to a male figure who isn’t wearing a helmet since his ‘spiky’ hair is clearly visible. The figure in the image appears to be wearing some sort of air tank and a suit covering the rest of his body.