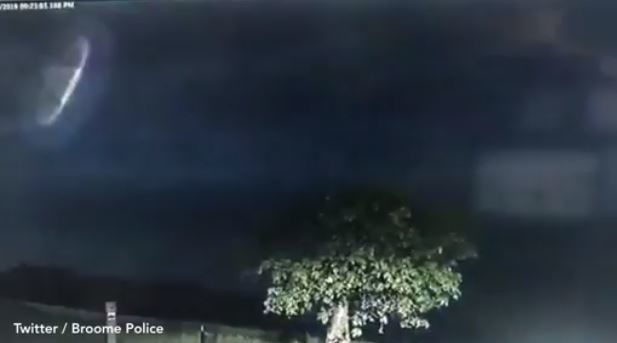 The 15-second video begins with flashes of lightning bursting through the skies during a thunderstorm.

Suddenly, a spark of lightning reveals an unidentified object appearing out of the clouds.

The circular-UFO swiftly floats in mid-air before gliding off screen, leaving an almost transparent trail.

After reviewing CCTV at town beach of last nights storm, it appears we were not alone 🔭🛸🛸🛸🛸 pic.twitter.com/Efh6SuPX7S

Broome Police captioned the clip: “After reviewing CCTV at town beach of last night’s storm, it appears we were not alone.”

The video has since received more than 5,000 views and welcomed many comments.

One viewer stated: “It’s a damn alien, but not sure if it’s Area 51 replica vehicle or intergalactic vehicle. Insane footage.”

Another said: “Amazing looks like ball lightning. How lucky to actually see it first hand.”

But the most likely explanation, as was pointed out by many viewers, was that it was simply a reflection of a bright light.

It comes only days after a mystery cluster of lights, which were ‘not visible with the naked eye’, appeared in a photograph.