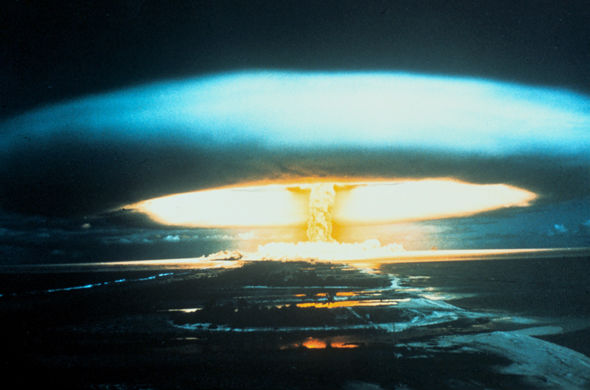 A PASTOR has warned the United States could be wiped out by nuclear war after he analysed texts from the Bible.

American Pastor Greg Laurie, of Harvest Christian Fellowship in Riverside, California, believes the US could be obliterated in a nuclear war before the end of the world begins.

Pastor Laurie says the prophecy was revealed to him after he read the Bible and discovered there was no mention of a “reigning superpower” in the end days, which he has interpreted as the US being destroyed imminently.

He said: “Here is what concerns me. We do not find the reigning superpower on the face of the Earth anywhere in the Last Days scenario. Other nations emerge.

“So where is America? I pray we are not out of the picture, because we have been in some kind of nuclear conflict.”

As things stand, it would seem the nation most likely to attack the US with nuclear weapons would be North Korea.

But as Pastor Laurie points out, there is no mention of Kim Jong-Un’s nation either – but it does talk about Iran which could assist North Korea by the Pastor’s reckoning.

He said: “In the Last Days there is no mention of any nation that would resemble North Korea however the Bible does speak of Iran in the End Times scenario.

“You might be surprised to know there is an alignment of sorts between North Korea and Iran.

“In fact, former ambassador the United Nations John Bolton recently said if North Korea developed a delivery system for nuclear weapon Iran would have it the next day simply by writing a cheque.”

North Korea has repeatedly threatened to use nuclear weapons and in its latest warning has told the US to take the threat “literally”.

The Asian nation has been ramping up threats to the US and has increased testing of nuclear weapons in recent months.

The most recent test took place on September 3 at the Punggye-ri Test Site which was so powerful it was registered as a 5.7 magnitude earthquake by the South Korean government. China and the US also registered it as an earthquake at at even-stronger 6.3 magnitude.

Kim Jong-un also issued another warning to the US as a senior diplomat from Pyongyang said warnings of a possible atmospheric nuclear test over the Pacific Ocean should be taken “literally”.

Mr Trump is set to make a visit to Asia next week in a bid to highlight his campaign to put pressure on North Korea to give up its nuclear and missile programmes.