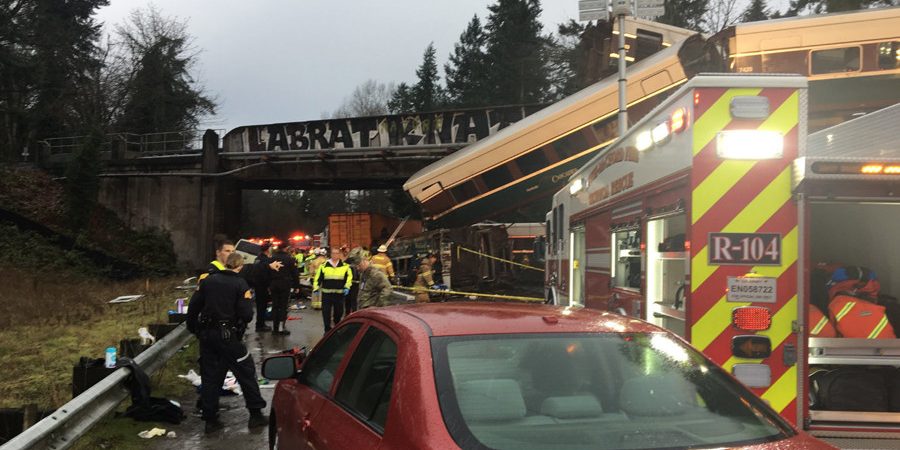 An Amtrak train with 78 passengers and 5 crew on board has derailed on a bridge in the US state of Washington. Emergency services are at the scene, and fatalities have been reported.

The sheriff confirmed to media that there were “some fatalities” in the incident, adding that the exact number is still unknown. He also added that 70 people were on board the train in total.

The sheriff’s office has released photos of the mangled train cars dangling off the overpass and blocking the highway.

Amtrak confirmed there were 78 passengers and 5 crew members on board the Cascades 501 train on its inaugural trip along the new route.

The train was traveling from Tacoma to Olympia and derailed just west of DuPont, in Pierce County. An airlift helicopter is on its way to the scene, according to KIRO 7.

The Pierce County Sheriff’s Office tweeted that “injuries and casualties” have been reported, stating that exact numbers will be revealed soon.

Seventy-seven people have been transported to area hospitals after the derailment.

Mounts Road and I 5 pic.twitter.com/svsT9v8O4H

Passenger Chris Karnes said those on the train were forced to kick out train windows to exit, as the emergency doors were not functioning correctly.

“We had just passed the city of DuPont and it seemed like we were going around a curve,” Karnes said, as quoted by CBS News. “All of a sudden, we felt this rocking and creaking noise, and it felt like we were heading down a hill. The next thing we know, we’re being slammed into the front of our seats, windows are breaking, we stop, and there’s water gushing out of the train. People were screaming.”

“The tracks for this line were supposed to be upgraded to be able to handle higher speeds,” Karnes continued. “I’m not sure what happened at this juncture.”

Washington Governor Jay Inslee has thanked the first responders at the scene, and called the incident an “ongoing and serious situation.”

Amtrak train derailed just south of Dupont. Emergency vehicles came immediately. Happened about 50yd before I was involved in it. pic.twitter.com/jMMVFvngjr

The derailment occurred during morning rush hour, and shut down the southbound lanes of Interstate 5, according to the Washington Department of Transportation. Drivers have been advised to avoid the area.

@KING5Seattle terrifying to see this morning. Praying everyone is okay.. pic.twitter.com/p97DM858jF

The derailed cars are blocking the south-bound lanes of I-5, causing a three-mile backup of vehicles on the interstate, according to local media. I-5 has been closed until further notice.

Amtrak train 501 was part of a service that launched Monday morning. Trains 504 and 509 have been canceled, Amtrak said.

This was what all the passengers received before the @Amtrak ride. On the very first day, the very first ride, the train derailed. pic.twitter.com/YLgtDwrHnH

All SB lanes of I-5 blocked near Mounts Road in Pierce County due to derailed train car. Avoid area! pic.twitter.com/SBH7dCc6yg

It will take “all day or a couple of days” to clear the area and finish the investigation, Trooper Brooke Bova of Washington State Patrol told reporters. The highway will likely remain shut for the remainder of Monday, she added.

The train has derailed. Emergency crews are on the scene. Massive damage. People are hurt. pic.twitter.com/f62gjUrZN1