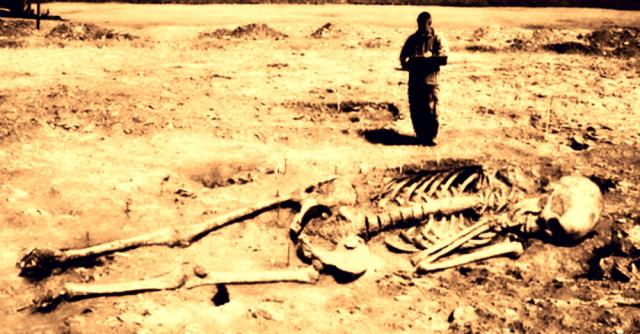 Ancient Script Seems To Indicate The NEPHILIM Once Inhabited The Earth

The Qumran caves in the West Bank have been considered a veritable treasure trove for historians, particularly those specialising in ancient literature and mythology. Sixty years ago, archaeologists unearthed an ancient book in these caves which is referred to as ‘The Book of Giants’. This text gives the details about an ancient race of otherworldly creatures who existed and eventually died out on Earth.

At this current time, there is very little that historians can deduce about the authorship of ‘The Book of Giants’. However, it has been noted that there are remarkable crossovers between this mysterious text and other known ancient manuscripts such as the Mesopotamian epic of Gilgamesh and the apocryphal Book of Enoch.

[Mahway] mounted up in the air like strong winds, and flew with his hands like eagles […he left behind] the inhabited world and passed over Desolation, the great desert […]and Enoch saw him and hailed him, and Mahway said to him […] hither and thither a second time to Mahway […]The Giants await your words and all the monsters of the earth. If […]has been carried […] from the days of […]their […] and they would be added […] we would know from you their meaning […] two hundred trees that from heaven came down…

The Book of the Giants describes the creatures as ‘two hundred trees from heaven’ which came down and populated the planet Earth. They are described as a corrupt and debased species, prone to hideous acts of violence and unnatural acts with animals and human beings. After a period of years, one of the giants Mahway, started to experience prophetic dreams. These dreams saw a tablet bearing the names of everyone on Earth being submerged beneath the water. When the tablet rose again, all but three of the names had been washed away by the waves. This particular passage has been interpreted as referring to the survival of Noah and his family after the great flood.

It was when Mahway shared these visions with his fellow giants that they realised the futility of attempting to resist the forces of heaven. They decided to seek out Enoch and ask him to plead to God on their behalf. Enoch is an ancient Jewish mythological figure believed to be the great-grandfather of Noah. He has a reference in the Book of Genesis where he is described as having a special, personal relationship with God. He lived for an astonishing three hundred and sixty-five years before simply disappearing with God one day. Enoch interceded on behalf of the Giants and delivered a damning judgement to them from God. However, he promised them that there was some hope for their redemption.

It is assumed that the Giants were washed away in the great flood that devastated the world several generations after that. What the race did in the interim is still a matter of great mystery. Another mystery is what this giant race could have been. The fact that they are described as coming down from heaven strongly suggests that there were of an extra-terrestrial origin, which has led some to speculate that the ‘giants’ may have been the heavily mythologised race of ancient aliens called the Nephilim.

The Book of Giants explains how the Nephilim caused chaos on Earth and changed everything during that time. A summary statement of the descent of the wicked angels, bringing both knowledge and havoc. Compare Genesis 6:1-2, 4.

The angels exploit the fruifulness of the earth.

The two hundred angels choose animals on which to perform unnatural acts, including, presumably, humans.

The outcome of the demonic corruption was violence, perversion, and a brood of monstrous beings. Compare Genesis 6:4.

The giants begin to be troubled by a series of dreams and visions. Mahway, the titan son of the angel Barakel, reports the first of these dreams to his fellow giants. He sees a tablet being immersed in water. When it emerges, all but three names have been washed away. The dream evidently symbolizes the destruction of all but Noah and his sons by the Flood.

The Giants realize the futility of fighting against the forces of heaven. The first speaker may be Gilgamesh.

Ohya’s dream vision is of a tree that is uprooted except for three of its roots; the vision’s import is the same as that of the first dream.

Ohya tries to avoid the implications of the visions. Above he stated that it referred only to the demon Azazel; here he suggests that the destruction isfor the earthly rulers alone.

Someone suggests that Enoch be found to interpret the vision.

After a cosmic journey Mahway comes to Enoch and makes his request.

Enoch sends back a tablet with its grim message of judgment, but with hope for repentance.

A fragment apparently detailing a vision that Enoch saw.

The Book of the Giants By W. B. HENNING: