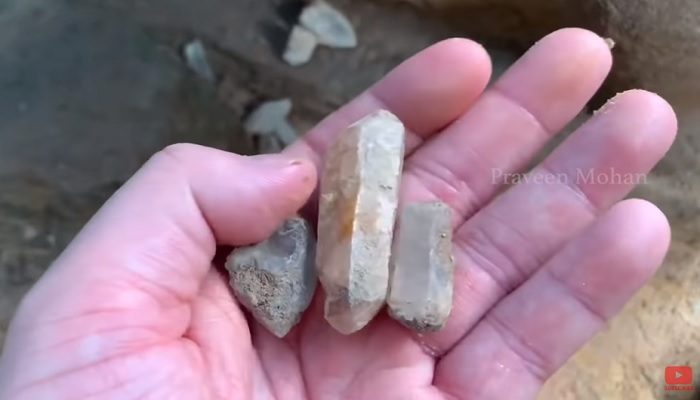 Archeologists have unearthed some very strange things in an ancient Hindu temple called Sra Srang in Cambodia and this is ground breaking because it changes everything we know about ancient statues and temples.

This looks like just a stone turtle right? But when they when they tapped on this, its shell began cracking on top, and the crack developed into a nice little rectangle. I got the footage of how archeologists slowly inserted a sharp blade into the crack, and then started to move the blade all around the crack, and made the crack bigger, and then they opened this stone statue like a container. Inside, is a large rectangular hole, which had a strange gel like substance, almost like wet silica gel. You can see how archeologists are taking a small sample out of this, and are trying to figure out what it is. What is this gel? And why has this been safely placed into this stone container, and why was it buried in the temple premises? Experts confirm that this is at least 1,000 years old, but it could be much older.

This is an amazing discovery, right? But archeologists have found something even more strange, they found another stone turtle, which was also buried in dirt. On the And they were able to open that also, it had a triangle shaped lid on its shell. And what they found inside is shocking. They found neatly polished crystal quartz stones. Multiple news sources confirm this. And they found hundreds of neatly polished crystal quartz stones buried on site. I mean look, this is the original footage from the excavation site, the crystals fill up 2 plastic bags, and this is how they look after lying in the dirt and marsh for 1000 years, imagine how they would have looked when they were cut back then. As soon as these were found, locals started to come in and pray in large numbers, because they felt a strange energy radiating from them. Cambodians are very spiritual people and they performed all sorts of rituals on these artifacts and crystals.

But is this just spiritual energy radiating from them, or is there science behind all this? I mean why did ancient builders cut hundreds of crystal quartz stones, polish them, and safeguard them? Today, we use the same material in semiconductors for transistors, integrated circuits, the first radio communication devices we used were made purely using crystal quartz. Is it possible that the ancient builders were using some type of a radio communication device?

But inside the turtle container they also found something even more strange. They found thin bronze wires. Archeologists are baffled by this and they just dismiss it by saying these were just threads used for religious purposes. No Hindu or Buddhist ritual ever uses bronze threads, this is unheard of. These are bronze wires and ancient builders were using it for some other reason. Bronze is not a metal, it is an alloy made of multiple metals like copper and tin, and ancient builders made them into thin wires. What else could possibly be the use of these bronze wires, other than some type of electric or electronic purpose?. Today we use bronze wires, you can go to a store and buy Phosphor bronze wires and use it for switches, relays, all types of electric and electronic instruments, okay? Is it just a coincidence that they found crystal quartz and bronze wires side by side? Look at the crystal radio sets we used some decades ago, these were simple devices made with wires and crystal quartz. I mean the only thing missing is an antenna, and they could make a crystal radio device with these items and start receiving signals.

And believe it or not, they also found these strange metal objects buried in the dirt. Can you see what these are? Are these religious tridents, or are they antennas used for radio communication? When archeologists cleaned the dirt, they could not believe their eyes, because these are very high quality metal objects which show almost no deterioration. In spite of being buried for such a long time, they had no trace of rust or decay. Is it possible that these high quality metal rods with three prongs sticking into the air, were used as antennas in ancient times?