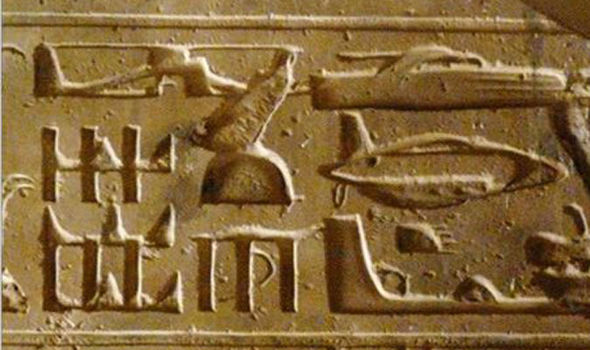 The 3,000-year-old hieroglyphs found in Seti I’s temple in Abydos, Egypt, are said to depict nothing less than a helicopter, plane and futuristic aircraft among the usual insects, symbols and snakes.

The writings have become known as the “Helicopter Hieroglyphs” among pseudoscience and conspiracy circles, with many supporters of the theory saying if the ancient civilisation was putting helicopters and modern spacecraft in their artwork, then they must have seen them, or at least pictures of them.

And for that to have happened, someone from the future must have taken them back.

Some have even taken the theory a step further, introducing aliens to the equation.

One popular myth is that the “advanced race” who bought details of futuristic technology to the Egyptians, were visitors from a far-flung highly advanced planet, to share their knowledge with the primitive communities on Earth.

The ancient aliens conspiracy theory claims these extraterrestrials were the ones behind the development of the pyramids, Stonehenge and other world famous monuments.

Steve me era is a UFOologist who tours the country giving talks on the research he carries out. 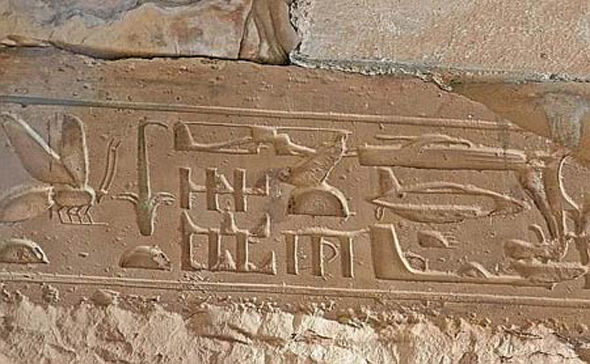 At a UFO conference in Warminster he produced the Helicopter Hieroglyphs to continue the debate.

Turning to the plane, he added: “And what about this? Is that a rudder and this the wing?

“I am not saying that this is a helicopter, but it is worth considering. Why would they put these images in and had they seen them?”

But, it appears there are other explanations than time travel that have been put forward.

Firstly, sceptics say the lack of any mention if such aircraft or time-travelling visitors in an andy Egyptian writings pretty much rules it out.

They also point out the Egyptians recorded most events and were so proud of their achievements it seems inconceivable that something so monumental as visitors from the future would have gone unrecorded apart from cryptically in a tucked away section of hieroglyphs near a roof.

There is also evidence that, while it is true, the original photographs of the hieroglyphs in question contain these shapes, that the pictures have been digitally enhanced to make them appear clearer.

But other sceptics have gone even further in rebutting the claims.

According to the Rain is Cool website, the mysterious markings are the result of an almighty cock-up.

The website says the futuristic mages have been created accidentally by the overlapping of one Egyptian’s name over another’s.

Egyptologists say overlapping carvings were not an uncommon feature – leading to an ancient typo.

In a report looking at the mystery, the website said: ” Pharaohs had five names.

“Each name is usually started with specific pictograms.”

The article explained these are:

*Birth name (duck and sun – the name in an oval cartouche)

*Horus name (a falcon atop a rectangular cartouche)

*Golden Horus name (a falcon sitting on a swag)

*Nebty name (a cobra and a vulture over baskets).

“The part of the roof support hieroglyphs in question are explained by the dueling Nebty names of Seti I and Ramesses II (farther to the left out of the picture are superimposed sedge and bee names as well) That is to say, one name is carved over the other along the entire thing.

Anywhere it says Seti I, Ramesses II is carved over it, or vice versa. [here the hieroglyphs read from right to left and from top to bottom]:

An overlapped image showing both names was provided, showing the parts of the vehicles are actually not all connected.

Of course the conspiracy theorists are having none of this explanation, but who do you believe?