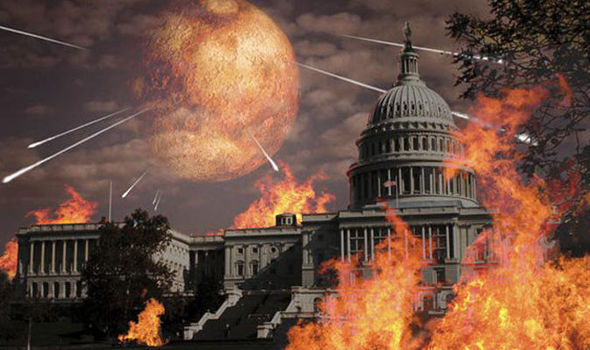 RUSSIAN President Vladimir Putin is planning to warn the world that a mythical planet heading towards Earth is TRUE if Donald Trump does not make it into the White House.

That is the shocking claim of a conspiracy theory going viral online.

Conspiracists and UFO seekers have been claiming for years that a mysterious huge celestial body called Planet X or Nibiru was hidden away in our solar system, on such an orbit that it passes close to Earth every few thousand years.

And the size of the planet and its gravitational pull is so big that it causes havoc on Earth by trigger earthquakes and volcanoes as it passes, the claim states.

The theory was bolstered in January when NASA announced the discovery of a Planet Nine hidden in our solar system that is about 10 times bigger than the Earth.

The conspiracy theory goes that all major world leaders know about the threat of Nibiru, but are keeping the news secret from the masses due to the fear they would lose control over the populations if we knew what was coming.

Claims appear to have begun life on the www.someonesbones.com conspiracy theory website, which claims to print the news the mainstream media dares not to, but also says it uses humour and levity to leak out the truth.

The someonesbones.com article states: “In a candid interview with Pravda, Russian President Vladimir Putin stated implicitly that he would tell the world about Nibiru if Donald Trump loses the presidential election.

“In July and August, we ran a series of articles highlighting a three decade long secret war between the White House and the Kremlin, culminating in a confidential agreement between Putin and Trump.

“Putin promised to remain silent about Nibiru, and in exchange, Trump vowed to dismantle and expose the Nibiru cover-up as his first presidential act.

“At the time, Trump’s ascension to the White House seemed certain. In light of recent events, however, Trump’s presidential bid is in serious jeopardy, and Vladimir Putin has strong fears that Trump will lose the election and thus be unable to make good on his promise.”

The claim goes on to obtain a foreign service report translated by the Russian Ministry of Defense, which detailed Putin’s inner turmoil.

This report allegedly said: “In the event of a Trump defeat, Putin plans immediately to disclose Nibiru on all major Russian television networks, including RT news.”

UFO websites, who take a keen interest in everything Nibiru have also got involved.

UFO blogger Scott C Waring is convinced by the theory.

He wrote: “Being the head of Russia, one of the three most powerful countries in the world, Putin would of course know all about Planet X and how its orbit is 10,000 to 20,000 years for each time it passes Earth.

“It also looks like he is willing to tell the public about it if he doesn’t get his own way if Trump doesn’t win the election. I cannot verify the source yet, but still searching for the original.”