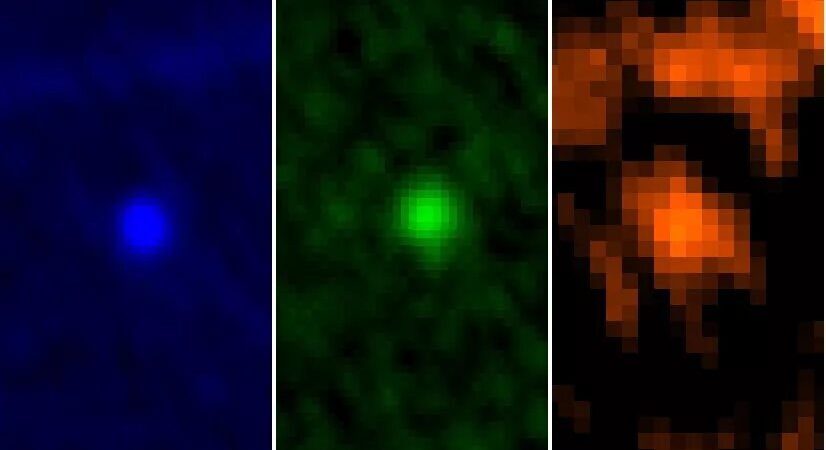 Asteroid Apophis Speeding up Due to Sunlight, Odds of 2068 Impact Being Recalculated

Astronomers say they’ll have to keep an eye on the near-Earth asteroid Apophis to see how much of a danger the space rock poses to our planet during a close pass in 2068. But don’t panic: The chances of an impact still seem very low.

Under certain circumstances, the sun can heat an asteroid unevenly, causing the space rock to radiate away heat energy asymmetrically. The result can be a tiny push in a certain direction — an effect called Yarkovsky acceleration, which can change the path of an asteroid through space.

Since astronomers hadn’t measured this solar push on Apophis before, they didn’t take it into consideration when calculating the threat the asteroid poses to us in 2068. Those previous calculations showed a tiny impact probability — around 1 in 150,000.

Now, a new study shows the asteroid is drifting away from its previously predicted orbit by about 557 feet (170 meters) a year due to the Yarkovsky effect, lead author and University of Hawaii at Manoa astronomer David Tholen said during a press conference on Oct. 26.

“Basically, the heat that an asteroid radiates gives it a very tiny push,” he explained during a virtual meeting of the American Astronomical Society’s Division for Planetary Sciences. You can find the press conference on YouTube here. It begins at the 22-minute mark.

“The warmer hemisphere [of the asteroid] would be pushing slightly more than the cooler hemisphere, and that causes the asteroid to drift away from what a purely gravitational orbit would predict,” Tholen said.

Showing the orbit for the 1,120-foot-wide (340 m) Apophis, he indicated that astronomers thought they had enough observations of the asteroid — collected over the years after its discovery in 2004 — to more or less rule out an impact in 2068. Those calculations, however, were based on an orbit not affected by the sun’s energy. Ultimately, this means we can’t yet rule out Apophis being a threat in 2068, Tholen said.

“The 2068 impact scenario is still in play,” Tholen said. “We need to track this asteroid very carefully.”

Fortunately, the asteroid will make a close (yet still safe) approach to our planet in 2029, allowing ground-based telescopes — including the Arecibo Observatory’s powerful radar dish — to get a more detailed look at the asteroid’s surface and shape. Apophis will be so close it will be visible with the naked eye, at third magnitude — about as bright as the binary star Cor Caroli.

“Of all dates, Friday the 13th in April, April 13 [2029], is when the flyby will occur,” Tholen said., “Obviously, the 2029 close approach is critical. We’ll know after that occurs exactly where it [Apophis] was as it passed the Earth, and that will make it much easier for us to predict future impact scenarios.”

Tholen’s team made the discovery after four nights of observation in January and March with the Subaru Telescope, a Japanese optical-infrared telescope on the summit of Maunakea, Hawaii. The researchers collected 18 exposures of the asteroid at a very high precision, with an error of only 10 milliarcseconds in each observation. (A milliarcsecond is a thousandth of an arcsecond, an angular measurement that helps scientists measure cosmic distances.)

“We really nailed the position of this asteroid extremely well,” Tholen said. “That was enough to give us a strong detection of the Yarkovsky effect, which is something we’ve been expecting to see now for a while.”

Tholen noted that Apophis has been troublesome for astronomers, with “numerous impact scenarios” predicted (and then largely ruled out) since it was first found in 2004. For example: Initially, scientists calculated a 3% chance of Apophis slamming into our planet in 2029, a prediction Tholen said was quickly ruled out after more observations showed the true path of the little world.

If there’s any threat of an impact, astronomers will know long before 2068 how to approach the problem. Engineers around the world are developing ideas about how to deflect dangerous asteroids from our planet, concepts that range from gravitational tugs to “kinetic impactors” that would knock an incoming rock off course.

A joint European-NASA mission will also test and observe asteroid deflection at a space rock called Didymos, starting in 2022. If all goes to plan, NASA’s Double Asteroid Redirection Test (DART) spacecraft will slam into “Didymoon,” the moon orbiting Didymos. The European Space Agency will then launch the Hera mission in 2023 or 2024 and reach Didymos two years later, to see how well the kinetic impactor did in moving the moon from its previous orbit.

NASA has a dedicated Planetary Defense Coordination Office that collects asteroid observations from a network of partner telescopes, and which runs through scenarios with other U.S. agencies for asteroid deflection or (in the worst case) evacuating threatened populations from an incoming space rock. So far, decades of observations have found no imminent asteroid or comet threats to our planet.

Headline image credit and caption:
ESA’s Herschel Space Observatory captured asteroid Apophis in its field of view during the approach to Earth on January, 5-6, 2013. This image shows the asteroid in Herschel’s three PACS wavelengths: 70, 100 and 160 microns.