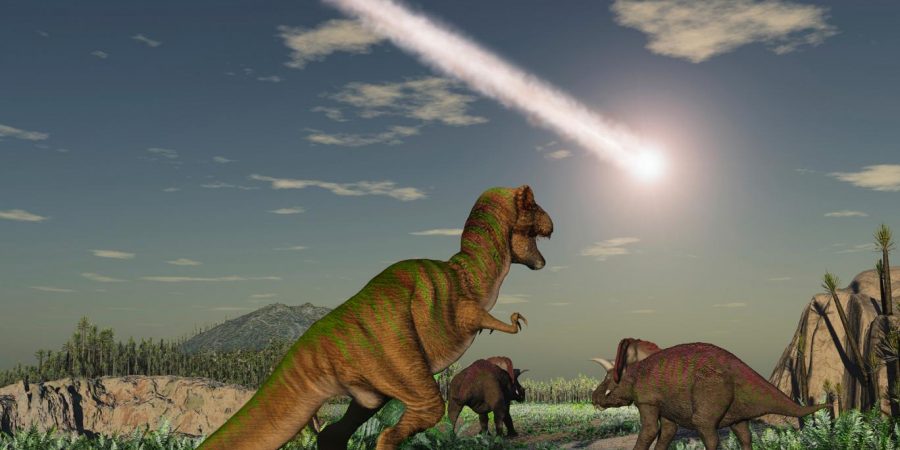 Just think, this could happen to us any moment without warning, very sobering thought…

Dinosaurs were wiped out by an asteroid strike 66 million years ago.

It is a vision of hell on Earth. The sun disappeared behind a cloud of smoke that encircled the planet, turning day into night and causing temperatures to plummet as fire rained down from above.

And if that wasn’t bad enough, the massive asteroid that struck the planet 66 million years ago – wiping out the dinosaurs and many other species in the fifth mass extinction of all life – set off earthquakes, giant tsunamis and volcanoes.

Even after the dust cleared nearly two years later, chemical reactions in the upper atmosphere would have wrecked the protective layer of ozone so that the sun’s rays would have irradiated anything left alive by the strong ultraviolet light.

It seems extraordinary that life survived such an Armageddon-like event, which was laid bare by researchers who used a sophisticated computer model to work out the effect of the 10km-wide asteroid on the climate.

They said their work, supported by Nasa, could help work out how the atmosphere would be affected by the detonation of large nuclear bombs and the chances of the feared “nuclear winter”.

But it is also worth considering other scientists’ warnings that human activity is ushering in the sixth mass extinction of life on the planet, with the loss of animal life on a par with the astonishing destruction revealed by the new research.

One of the researchers, Dr Charles Bardeen, of the US National Centre for Atmospheric Research, said the initial, devastating impact of the asteroid would have been just the start of the Earth’s troubles.

“The extinction of many of the large animals on land could have been caused by the immediate aftermath of the impact, but animals that lived in the oceans or those that could burrow underground or slip underwater temporarily could have survived,” he said.

“Our study picks up the story after the initial effects – after the earthquakes and the tsunamis and the broiling.

“We wanted to look at the long-term consequences of the amount of soot we think was created and what those consequences might have meant for the animals that were left.”

Previously scientists have estimated that about 15 million tons of fine soot was created and carried in the wind around the world following the asteroid strike.

The researchers in the new study, described in an article in the journal Proceedings of the National Academy of Sciences, found that this would have reduced the amount of light during the day to about the same as the night when there is a full moon.

This would have prevented plants from photosynthesising, causing major problems for all life on the planet. Average temperatures would have fallen by about 28 degrees Celsius on land and 11C over the oceans.

It is estimated that more than three-quarters of all species on Earth, including most of the dinosaurs, became extinct during this time.

The asteroid strike, known as the Cretaceous-Paleogene (K-Pg) extinction event, vaporised rock in the air, which then condensed into small particles known as spherules. As these fell to the ground, the friction would have made them so hot that they would have started fires on the ground. Today a thin layer of spherules can be found all over the world.

Photosynthesis would have been impossible for about 18 months, the model predicted. Meanwhile in the upper atmosphere, the soot in the upper stratosphere layer of the atmosphere would have absorbed energy from the sun, warming it by more than 200C.

This would have led to the destruction of the ozone layer, which protects life on Earth from harmful levels of radiation, and also enabled vast amounts of water to be stored in the stratosphere. The water vapour would have caused yet more damage to the ozone.

So as the skies cleared of soot, the sun’s rays would have irradiated life on the ground but it also began a rapid cooling process.

Less soot meant the stratosphere cooled, so the water vapour condensed and washed out some soot as it fell to the ground. This created a feedback loop that removed the soot layer in just a few months.

Dormant seeds burst into life, mammals came out of their burrows, the ozone layer slowly built up again and, gradually, life on Earth started to recover.

The researchers cautioned that their model had used one of the Earth today, which is slightly different to the one 66 million years ago, in terms of the gases in the atmosphere and the position of the continents.

And Dr Bardeen said the model used also had its limitations.

“An asteroid collision is a very large perturbation – not something you would normally see when modelling future climate scenarios,” he said.

“So the model was not designed to handle this and, as we went along, we had to adjust the model so it could handle some of the event’s impacts, such as warming of the stratosphere by over 200 degrees Celsius.”

However, he added that their results could help scientists work out what might happen in the event of widespread nuclear war.

“The amount of soot created by nuclear warfare would be much less than we saw during the K-Pg extinction,” Dr Bardeen said.

“But the soot would still alter the climate in similar ways, cooling the surface and heating the upper atmosphere, with potentially devastating effects.”