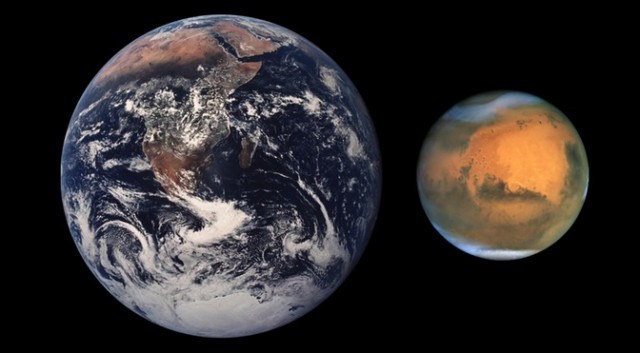 Seth Shostak, director of the Search for Extraterrestrial Intelligence (SETI) institute, says life as we know it may have come from Mars.

He claims an asteroid collided with the red planet and flung dirt across space to Earth.

Shostak said: “It’s possible that billions of years ago, tiny bits of biology quit the Red Planet and infected ours.

“If so, your family tree – and that of every other terrestrial life form – has its deepest roots not in the ancient oceans of Earth, but in the vanished seas of Mars.”

The theory, known as panspermia, is that some microorganisms can survive the lifeless space between planets.

They then grew and evolved on Earth eventually creating humans, the theory continues.

Writing in the Huffington Post, Shostak added: “Scientists estimate that in the early days of the solar system, billions of rocks between an inch and a yard in size were involuntarily shuttled from the Red Planet to ours.

“In its youth, Mars was wetter and warmer than now, and could have spawned living things at a time when Earth was as lifeless as an octogenarian slumber party.

“Because so many martian rocks were kicked into space, it’s highly probable that at least some would have come from an inhabited patch of Mars – assuming it had inhabitants.

“And some of those would have landed in a suitably welcoming patch of Earth.”

In other baffling space news, yesterday five mystery UFOs flew past a space station – as NASA cut a live feed.

NASA also made a breakthrough discovery in the search for mysterious Nibiru planet.

While scientists revealed they are working to get humans living on Mars within 100 years.