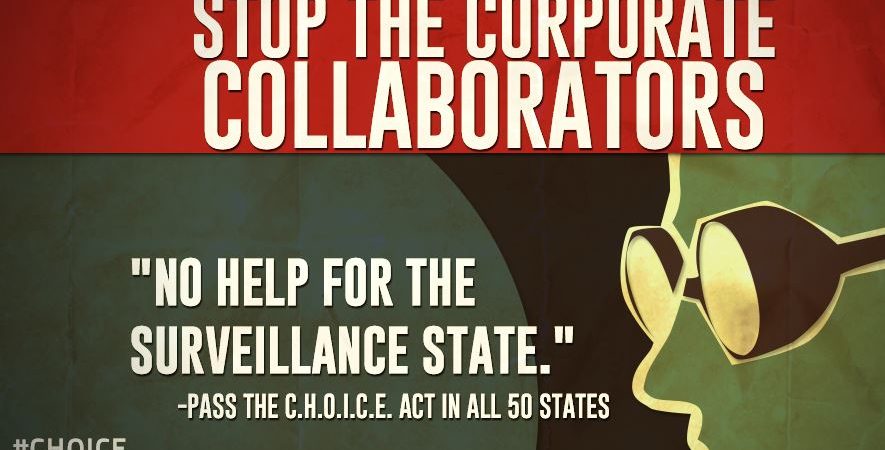 Communications company AT&T spies on you at the behest of the federal government and rakes in millions of taxpayer dollars in the process.

Through the program known as Project Hemisphere, AT&T searches trillions of call records for the DEA and other law enforcement agencies. The company collects data from every call that flows through its switches – not just calls made by AT&T customers. The information includes the number called and the caller’s location data. The company hands this information over to the government without any warrant requirement, most often in response to administrative subpoenas issued by agencies like the DEA without any judicial oversight.

AT&T owns more than three-quarters of landline switches and more cell towers than any company other than Verizon. The company’s database contains decades of call records.

Project Hemisphere came to light in 2013 when an activist stumbled upon a DEA PowerPoint file obtained in a FOIA request. The New York Times described it as a “partnership” between the government and the company.

The government pays AT&T to place its employees in drug-fighting units around the country. Those employees sit alongside Drug Enforcement Administration agents and local detectives and supply them with the phone data from as far back as 1987.

But new documents obtained by the Daily Beast reveals the program was far more expansive than first reported. Government agents not only access the system to fight the “war on drugs,”

Hemisphere isn’t a “partnership” but rather a product AT&T developed, marketed, and sold at a cost of millions of dollars per year to taxpayers. No warrant is required to make use of the company’s massive trove of data, according to AT&T documents, only a promise from law enforcement to not disclose Hemisphere if an investigation using it becomes public.

At least 28 of so-called intelligence centers across the country use Hemisphere, according to the Daily Beast documents.

The centers are staffed by federal agents as well as local law enforcement; one center is the Los Angeles Regional Criminal Information Clearinghouse, where Merritt’s number was sent for analysis. Analysis is done by AT&T employees on behalf of law enforcement clients through these intelligence centers, but performed at another location in the area. At no point does law enforcement directly access AT&T’s data.

Documents show law enforcement agencies obtain information from AT&T and then use “parallel construction” to build their cases without revealing the company’s involvement. In other words, police “confirm” the evidence through conventional police work, such as obtaining a court order for a wiretap or physical surveillance. That allows prosecutors to create what Electronic Frontier Foundation Adam Schwartz called a “false investigative narrative” in order to bring the case to trial without ever revealing the initial source of the information. A 2014 statement of work reveals the AT&T insists on this level of secrecy.

The Government agency agrees not to use the data as evidence in any judicial or administrative proceedings unless there is no other available and admissible probative evidence.

Schwartz called the document “striking” in an interview with the Daily Beast.

I’ve seen documents produced by the government regarding Hemisphere, but this is the first time I’ve seen an AT&T document which requires parallel construction in a service to government. It’s very troubling and not the way law enforcement should work in this country…At a minimum there is a very serious question whether they should be doing it without a warrant. A benefit to the parallel construction is they never have to face that crucible. Then the judge, the defendant, the general public, the media, and elected officials never know that AT&T and police across America funded by the White House are using the world’s largest metadata database to surveil people.

AT&T cashes in on its cooperation. According to the Daily Beast, when cities utilize the services, the feds reimburse them through the same grant programs that helps fund police militarization.

States can take action to address AT&T’s decision to help the federal government violate the Fourth Amendment by passing the CHOICE Act (Creating Helpful Options for Institutions, Corporations, and Enterprise). This legislation bars any company voluntarily providing direct support to a federal agency violating the Fourth Amendment from entering into contracts with the state.

While a state cannot forbid a private company like AT&T from passing information in to the federal law enforcement, it can choose the organizations it does business with. The CHOICE Act throws the ball into a company’s court, forcing it to chose: do business with the feds and support its rights violating operations, or refuse to provide such support and do business with the state.

The federal government and its cooperative private sector partners will continue to expand the U.S. spy state if Americans don’t take action to stop it. The federal government has shown zero inclination to rein in unconstitutional surveillance. That leaves it to state and local government to take action. Passage of the CHOICE Act may not stop AT&T from spying on you, but it would at least create consequences and bring the issue into the public eye.