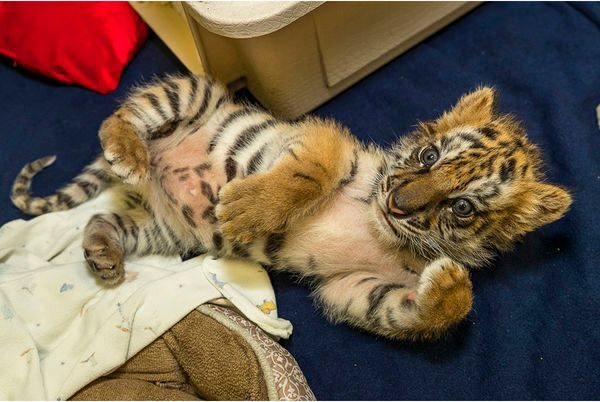 A weeks-old Bengal tiger cub that was allegedly smuggled into the US from Mexico by a Californian teenager has been given a new home in San Diego Zoo.

The tiny male cub was discovered by Customs and Border Protection officers between a passenger’s legs at the Otay Mesa border crossing on Wednesday, USA Today reported.

The young tiger was seized by customs officers and brought to the Paul Harter Veterinary Hospital at the San Diego Zoo Safari Park.

Californian Luis Eudoro Valencia was reportedly charged with smuggling and unlawful importation of wildlife for attempting to smuggle the animal. The teenager told investigators he bought the tiger for $300 in Tijuana, Mexico. Valencia was released on a $10,000 bond and he is due to appear at a preliminary hearing in early September.

A thorough health check revealed that the tiger was in good condition, the zoo said in a statement.

His heart and lungs sound good, his blood work looked great and, since he took a bottle from us, it’s a good sign he’ll continue to thrive,” Dr. Jim Oosterhuis said.

Oosterhuis estimated that the cub is between five and six weeks old and he weighs around six pounds.

“He has teeth coming in, so he’ll be teething in the next week or two – so, animal care staff will have a little chore getting him through that,” Dr. Oosterhuis added.

This 🐯cub was rescued coming into the US. At 5-6 wks old & weighing 6 lbs, he's now safe & sound with us. https://t.co/JMysDxAGOa #RescueCub pic.twitter.com/sbMqcK0wVp

The cub was later transferred to a care center in another part of the zoo. He is being kept in an isolated area, away from other animals, in accordance with San Diego Zoo Global’s protocols for new arrivals.

Visitors to the zoo can view the cub at the care center’s nursery window at various times in the day.

Ultimately the US Fish and Wildlife Service will decide what happens to the him as it will determine where the cub’s permanent home will be.