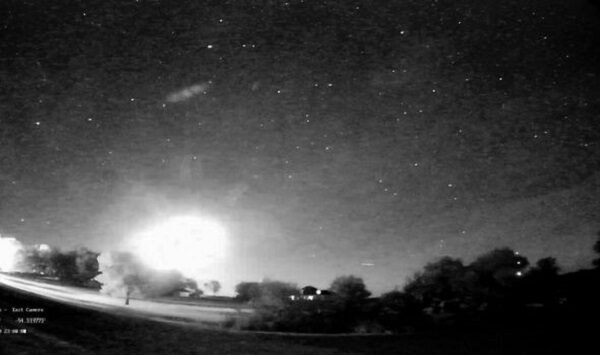 Residents of Missouri, Illinois, Iowa and Michigan all reported seeing a bright fireball blasting through the sky on August 19. Stunned onlookers spotted the astronomical phenomenon, and headed in their droves to the website of the International Meteor Organisation (IMO) to report their sightings.

Chris said: “It came straight down on a vertical trajectory and slowed down as it approached the tops of the tree line, very bright green with bright white sparks coming off it. Amazing sighting!

Timothy added: “It was so bright that we could see it from inside the house with all the lights on.

“It lasted long enough to alert another person to turn around and look at it and they saw it for several seconds.”

Jackquie: “This was the most incredible thing I have ever seen in the sky, well next to the lunar eclipse. It was amazing!”

Asteroids and meteors produce a bright explosion of fire when they hit the atmosphere as it is the first time the space rock has ever met resistance.

Air seeps into the pores and cracks of the rock, pushing it apart and causing it to explode.

The IMO said: “Fireballs are meteors that appear brighter than normal.

“Due to the velocity at which they strike the Earth’s atmosphere, fragments larger than one millimetre have the capability to produce a bright flash as they streak through the heavens above.

“These bright meteors are what we call fireballs and they often strike fear and awe for those who witness them.”

While this meteor was small, the bright flash reiterates the need for eyes on the skies to watch out for potential asteroid collisions.

While the chances of a major asteroid hitting Earth are small – NASA believes there is a one in 300,000 chance every year a space rock which could cause regional damage will hit – the devastating prospect is not impossible.

However, there are some plans on the go which could help Earth against potential asteroid strikes.

NASA is currently studying Asteroid Bennu, where its OSIRIS-Rex spacecraft arrived in 2018 to gather more information about the space rock.

NASA fears the asteroid, which is 500 metres in length and has the potential to wipe out a country on Earth, could hit our planet within the next 120 years, with the next close flyby in 2135.

The mission will give vital information on how to deflect asteroids from their collision course with Earth.

But NASA reiterates while there is a very small chance Earth could be impacted, “over millions of years, of all of the planets, Bennu is most likely to hit Venus.”