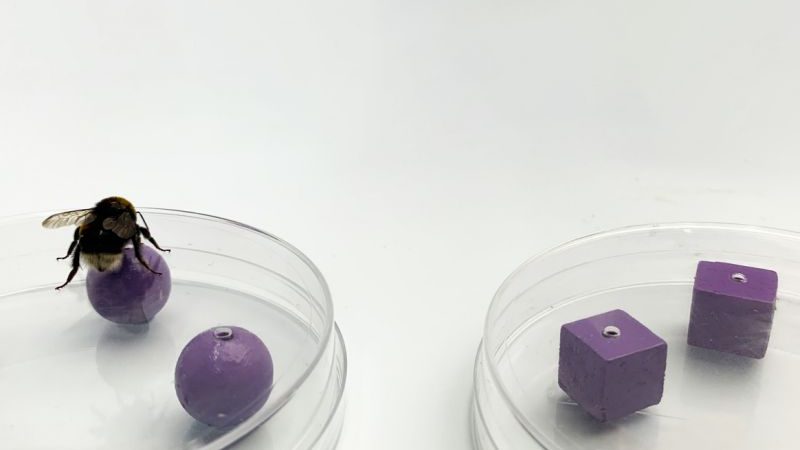 We think we know all about other life forms or how capable or not capable they are intellectually, but our rating of their intelligence is limited by our ability/inability to understand them.

Bumblebees have again been found to be capable of doing something thought to be restricted to animals with much larger brains: apply an understanding of objects formed with one sense when using another.

Humans can recognize by touch an object we have seen but not felt before, for example when searching the bottom of a bag. It’s so automatic for us we don’t really think about how remarkable it is – until we try to teach it to machines.

Primates and even rats have been shown to have a similar capacity to bridge sight and touch. Dolphins and certain fish can use their echolocation and electric field detection respectively to recognize objects they have seen visually. However, when Dr Cwyn Solvi set out to test this capacity with bees it had never been described in invertebrates.

Nevertheless Solvi, then at Queen Mary University but now at Macquarie University, placed a sugar solution in a hole in either a cubic or near-spherical shape, and quinine in the other. In Science, she describes allowing bees to either see the shape, and drink the liquids from it through a hole in a transparent plate, or walk over it in the dark.

Having learned to associate one shape with tasty food, and the other with an unpleasant experience (bees hate quinine), the bees were given access to the same shapes cleaned of solutions. This time, however, for each bee access reversed their training. Those that previously encountered the objects on a look-but-don’t-touch basis were now in the dark but with full opportunity to climb around them. Their counterparts whose learning experience had been by touch were now able to see the shapes, but not feel them.

Irrespective of the methods by which they had been introduced, the bees spent more time exploring or attempting to reach the shape they now associated with sugar. “The results of our study show that bumblebees don’t process their senses as separate channels – they come together as some sort of unified representation,” Solvi said in a statement.

Co-author Professor Lars Chittka added: “We’ve long known that bees can remember the shapes of flowers. But a smartphone can recognise your face, for example, and does so without any form of awareness… Something is going on inside the mind of bees that is wholly different from a machine – that bees can conjure up mental images of shapes.”

Since bees don’t forage in the dark it’s not clear if the capacity has direct evolutionary advantages, but Solvi told IFLScience: “If bees don’t have any sense of awareness of the world it reduces their flexibility dramatically. They will fail in any new situation.” The astonishing thing is they can manage it considering the weight restrictions on their brains.

Solvi told FLScience she is not aware of how many animals have been tested for similar capacities and found to lack them, but reframed the question. “It’s not so much whether an animal can do something, but are we clever enough to test them in a way that allows them to answer the question we are asking.”