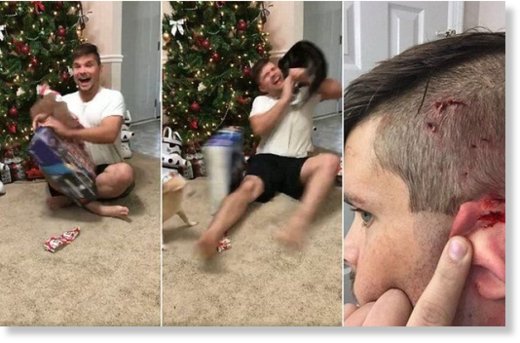 Paws off the Christmas presents!

Andrew Woodward, of Georgia, was enthusiastically ripping the wrapping paper off his new PlayStation 4 on Sunday when his cat pounced on him and viciously clawed at his head and neck.

Video of the incident was posted to Facebook by Woodward’s friend Jessica Freeman and had been shared nearly 200,000 times by Monday morning.

“This has resulted in a trip to the doctor and stitches. We love him and genuinely hope he feels better. It’s just nice to be able to laugh with your best friends,” Freeman said of Woodward’s injuries.

Since posting the video of the cat attack, Woodward and Freeman have been accused of animal abuse and somehow provoking the feisty feline.

“A human was attacked here, not a cat,” Freeman said in response to criticism, adding that the attack against her friend was premeditated.

“You can clearly see him walk up and calmly sit while planning his attack … Only in 2016 would people blame a person who didn’t touch an animal for getting attacked by said animal bc they were excited,” Freeman added.

Woodward — who is sporting some scratches and a tear in his ear — is expected to fully recover.