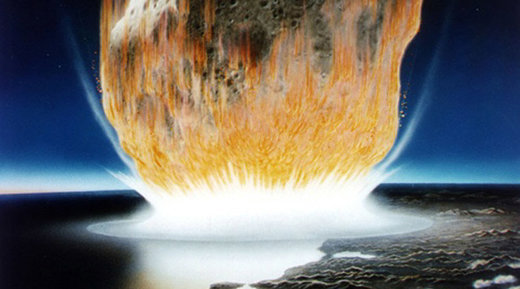 Editor’s comment: With the seemingly increasing asteroid and comet activity the last few years could they be expecting something or suspect something might happen soon and this ‘PSA’ is being used as a disguise to step up efforts?

The US government has proposed an increased global effort to locate 300,000 or so Earth-impact risks and prepare for potential future meteor collisions that could destroy cities.

The report says that while a “civilization-ending”smash with space rocks over the next 200 years is unlikely, the risk of “smaller but still catastrophic NEO impacts is real.”

“Current estimates of the NEO population predict that over 300,000 objects greater than 40 meters [131ft] in size could be an impact hazard to the Earth and have not yet been detected,” the strategy warns.

It suggests little is known about the location of many smaller NEOs which are similar in size to the 20 meter-Chelyabinsk fireball which lit up skies above Russia in 2013.

Though on the lower end of the size scale, the powerful airburst filmed above the Russian city exploded with 20-30 times the energy of an atomic bomb and caused skin and retinal burns on people below it.

The US strategy was written by members of the White House working group ‘Detecting and Mitigating the Impact of Earth-bound Near-Earth Objects’ (DAMIEN) and published in December.

It explains how even modestly-sized meteorites falling to Earth could jeopardize parts of our planet: “Small, rocky NEOs are likely to explode before hitting the ground, resulting in an airburst that could cause a wider radius of moderate damage compared to a similarly-sized NEO composed of mostly metal that would strike the ground and cause localized devastation.”

One of the key goals underpinning the strategy is a desire to build “international support and policies for acknowledging and addressing the potential Earth impact of a NEO.”

“Objectives include: coordinating the communication of detected impact threats within the US Government, as well as with other governments, media, and the public… and developing protocols for international interactions regarding NEO impacts outside of the US territory,” the document states.

The strategy notes that preparation is feasible since, unlike many natural disasters, “NEO impacts are predictable many years in advance and, most importantly, potentially preventable”.

Efforts to record space debris are already being made by the ESA Space Situational Awareness Programme, the Catalina Sky Survey and the University of Hawaii Pan-STARRS project.

Last October, the European Space Agency (ESA) announced 15,000 Near Earth Objects had been catalogued. The agency, which runs the Space Situational Awareness programme, cautioned that experts are still some way off documenting all impact risks in our solar system.

“The rate of discovery has been high in the past few years, and teams worldwide have been discovering on average 30 new ones per week,” Ettore Perozzi, manager of the ESA Coordination Centre, said at the time.

“A few decades back, 30 were found in a typical year, so international efforts are starting to pay off. We believe that 90 percent of objects larger than 1000 meters have been discovered, but – even with the recent milestone – we’ve only found just 10 percent of the 100 meter NEOs and less than 1 percent of 40-meter ones,” he said.