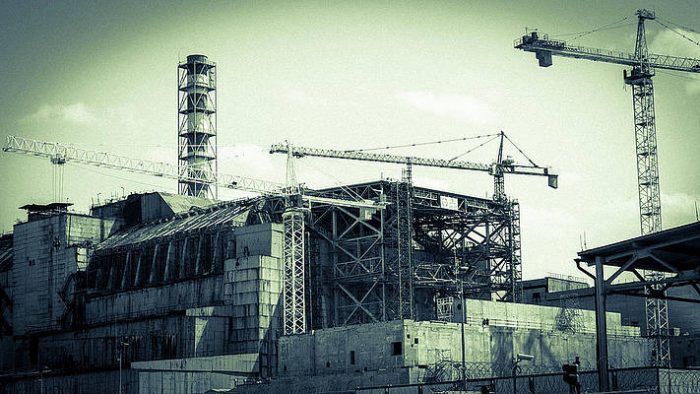 Chernobyl’s Molten Guts are Warming up, and Scientists Don’t Know Why

Over the past five years, a sensor keeping count of neutron emissions deep within the rubble of the Chernobyl nuclear power plant has kept track of a gradual spike in activity.

The rising count might be nothing. It might even drop back down again, given time. Scientists aren’t exactly keen on taking any chances, as the potential for a runaway nuclear fission reaction in the future can’t be ruled out until we know what’s going on.

Unfortunately, the precise location of the decaying material beneath debris and heavy slabs of concrete makes detailed investigations and potential fixes all that more challenging.

As reported by Science Magazine’s Richard Stone, researchers at the Institute for Safety Problems of Nuclear Power Plants (ISPNPP) in Kyiv, Ukraine, are yet to determine whether the noted rise in neutrons heralds pending disaster, or is more of a storm in a nuclear tea-cup.

“There are many uncertainties,” ISPNPP’s Maxim Saveliev told Stone. “But we can’t rule out the possibility of [an] accident.”

In what ranks as perhaps history’s most notorious nuclear accident, the Unit Four reactor at the Chernobyl complex underwent a devastating meltdown in late April, 1986, following an unexpected drop in power during a key safety test.

The resulting explosions of compressed steam cast a pall of radioactive material far across Europe, contributing to the premature deaths of what could amount to tens of thousands of people.

Within the rooms and corridors of the demolished facility itself, super-heated uranium fuel collected in pools mixed with molten zirconium cladding, graphite control rods, and liquefied sand to produce a hellish lava that eventually solidified into monoliths of fuel-containing materials, or FCMs.

Over the decades, uranium isotopes have continued to shoot off the occasional neutron from their nuclei. Those that happen to get close enough to another isotope’s nucleus risk upsetting their own delicate balance, driving free more neutrons.

Given a high enough concentration of atoms, the chain reaction of lost neutrons can generate enormous amounts of energy in a short amount of time, with potentially explosive consequences.

Neutrons ejected from the decaying heat of a uranium atom typically move a little too fast to be easily captured. This all changes when neutrons are forced to pass through certain media, such as water. Slowed down, they have a much higher chance of sticking to a nucleus and triggering its own decay.

With this in mind, it comes as little surprise that fission rates spike inside FCMs whenever they get wet.

For years, huddled beneath a hastily erected sarcophagus referred to as the Shelter, Unit Four’s ruins sat semi-exposed to the elements, allowing heavy downpours to seep inside the tangled mess of collapsed concrete and old machinery.

Amid fears that rainwater could send fission inside the FCMs into overdrive, engineers have managed to coat most of them in a neutron-absorbing solution of gadolinium nitrate.

A more robust covering was completed over the site in November 2016. The vast structure, called the New Safe Confinement (NSC), does a vastly better job of keeping everything dry.

Yet the space beneath the old Unit Four reactor – what was once room 305/2 – is still buzzing, with neutron emissions rising slowly but significantly since the NSC was erected.

Assuming it isn’t wet, it isn’t clear what’s behind the slow rise in neutron numbers. By the reckoning of ISPNPP, it’s possible this particular mix of materials has had an even easier time generating chain reactions of neutrons as it dehydrates.

Exactly why, and what to do about it, remain pressing questions, especially as the area continues to slowly dry out over time. Given where it sits, soaking it in gadolinium nitrate could be tricky. As is getting a dedicated sensor up closer to the source of the neutrons, beyond obstacles that might be interfering with measurements.

With emissions rising so slowly, risk of threats in the near future seem low. Worst-case scenarios would also fall far short of the 1986 catastrophe.

Still, given the delicate, crumbling state of the FCMs – and that room 305/2 is thought to contain around half of the reactor’s original fuel – even a small explosion could blast radioactive debris far enough to make its containment a concern.

There are plans for a clean-up of the fuel underway, with an interim storage facility currently awaiting a license from the Ukrainian regulator.

For now, little can be done but watch and keep on counting, hoping that in time, Chernobyl’s ticking will fall quiet once again.