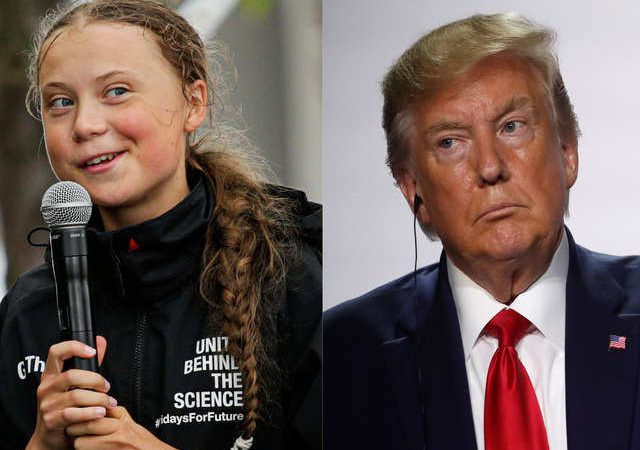 The Swedish teen turned on its head an attack against her by Trump last year that mocked her age as well as the fury with which she has denounced the complacency of world governments toward the impending climate crisis.

So ridiculous. Donald must work on his Anger Management problem, then go to a good old fashioned movie with a friend! Chill Donald, Chill! https://t.co/4RNVBqRYBA

“So ridiculous. Donald must work on his Anger Management problem, then go to a good old fashioned movie with a friend! Chill Donald, Chill!”

The Thursday tweet was a mirror image of one The Donald threw at Thunberg on December 12, 2019, following her appearance on the cover of Time magazine, and which attracted widespread criticism.

Netizens were clearly amused by the reversal, providing a welcome, humorous respite from an unprecedented political crisis in US history.

This is the best tweet of the last 72 hours and I love you for it.

She really went and said pic.twitter.com/AMAchFcvm7

You could try to dunk on a teenager, but they can and will dunk back. And they will succeed.

One of my least favorite stereotypes of autistic people is that we can't do sarcasmhttps://t.co/G2ubCGvlSV

That burn 🔥 may cause climate change!

Trump’s Twitter has become a site of more rage than usual for the head of state after he failed to emerge as the clear winner in the presidential election on Tuesday. Many of his tweets over the last three days have had all capital letters, and even more have been censured by Twitter for violating the social media site’s rules against spreading disinformation about the election.

Trump has declared victory ahead of any decision by election officials in several key states, and filed lawsuits claiming election irregularities have cost him the win.

At the time this article went to publication, neither Trump nor Democratic challenger Joe Biden had reached the necessary 270 electoral votes to be declared the winner, and ballots continued to be counted.

However, Thunberg wasn’t the only person giving Trump an ironic jab on Thursday.

Fun fact: a band made up of Hill staffers used the original for the band’s cover art back in the mid-‘90s. pic.twitter.com/IBBJe5Cu4g

Some entrepreneuring artist took to the sides of a railway bridge over the US Capitol Beltway outside Washington, DC, and spelled out “Surrender Donald” on the side for drivers to see. The message harkens back to an infamous guerrilla ad for a local band in the 1990s that in turn referenced a scene at the end of the 1939 film “The Wizard of Oz,” in which “Surrender Dorothy” is written in the sky by the Wicked Witch of the West, the film’s primary antagonist.