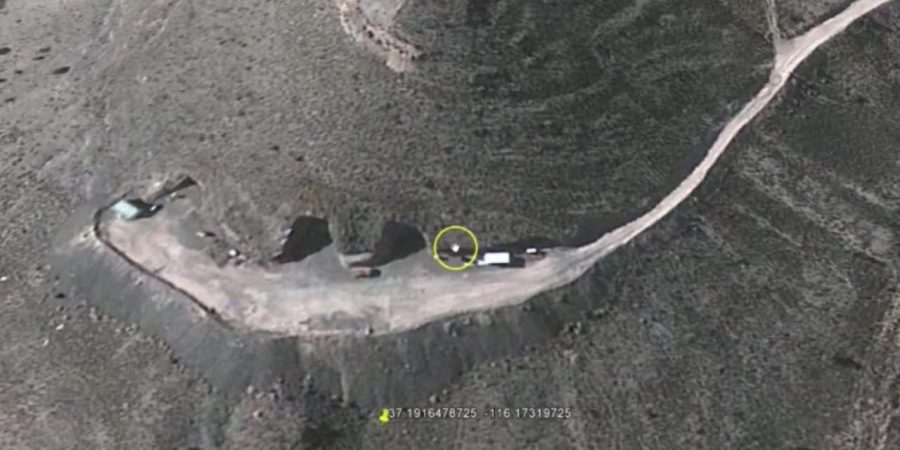 N 1989 an alleged mole from the highly top secret Area 51 US Air Force base came forward with staggering claims about the facility.

Bob Lazar, 58, said he reverse engineered recovered crashed alien flying saucers to try to develop their anti-gravity flying systems, at the mysterious base, which is guarded by armed security.

He spoke of UFOs being hidden in hangars carved out of the mountain sides close to the Nevada military base which is tucked away in the desert.

Mr Lazar’s claims have divided the UFO community ever since, with many believing he a credible whistleblower, while others say he is a fantasist who has been debunked.

Now, two brothers claim they may have found something near Area 51, that sounds similar to what Mr Lazar described.

The US Government did not acknowledge the existence of Area 51 until 2013, but it is now commonly accepted research is done their on new USAF spy craft.

However, conspiracy theorists are convinced that if flying saucers have ever crashed on Earth, the wreckage and alien bodies have been secretly taken to storage in Area 51.

One long-running claim is a UFO that allegedly crashed in the New Mexico desert near Roswell in 1947 and it is now stored at Area 51.

The brothers claim they have found what they believe could be a “UFO hangar” buried into the mountains nearby to the base, reports Dailystar.co.uk.

They used Google Earth to show aerial images of the strange sighting.

Blake said: “Right in this mountain range, if you see this driveway it seems to lead to some kind of hidden underground entrance.

“Are these two entries to a base within this mountain range?

“Are they harvesting minerals out of this mountain or is this an entrance to a military base?

“These are never-before-seen images. Is this a possible entrance where they’re hiding the UFOs and flying saucers recovered from Roswell?”

The brothers’ clip has been seen more than 35,000 times since it was posted.

One viewer said: “Whatever they have hidden from people there, must be huge.”

Another said: “The mountain itself looks almost like an alien craft.”

A third added: “That underground facility might be used for the storage of nuclear weapons or nuclear waste.”

Mr Lazar’s claims have been looked into by UFO researches and many claim that his alleged educational background does not stand up, as facilities he claims to have attended have no record of him.

However, Mr Lazar counter claimed his record had been wiped by the security services in a bid to discredit him.

Thirdphaseofmoon has also come in for its own criticism by UFO debunkers.

Third Phase of Moon features on a number of UFO website and YouTube channel black lists created by sceptical ufologists, who claim they have screened hoax and misrepresented footage.

The brothers deny this, claiming to be genuine researchers.

However, this month, they release a video alleging to show a new UFO just outside Dos Palos off Interstate 5 in California.

Yet, Scott Brando, who runs hoax-busting website ufoofinterest.org, says he tracked down the original footage… and it was a confirmed weather balloon filmed over Dos Palos, and videoed FIVE years ago