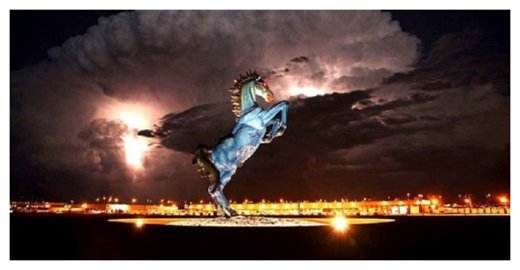 An ominous bucking horse greets visitors to Denver International Airport seen in the above headline image.

With apocalyptic murals, a terrifying giant horse statue and curiously laid-out runways, Denver International Airport has been the subject of many conspiracy theories since it opened in 1995.

Located 25 miles outside of Denver, the airport is enormous – it’s twice the size of Manhattan and reportedly went $2 billion over budget. 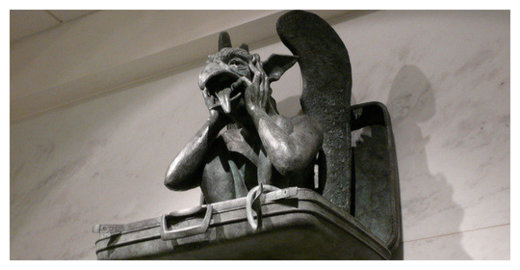 © K W Reinsch/Flickr
A gargoyle in a suitcase at Denver International Airport.

Before its construction, Denver already had an airport, Stapleton, which added fuel to beliefs that it was constructed to hide a large underground bunker, presumably reserved for members of the Illuminati.

Conspiracy theories around the airport centre on its strange collection of artworks and decor and its runways’ strange resemblance to a swastika. 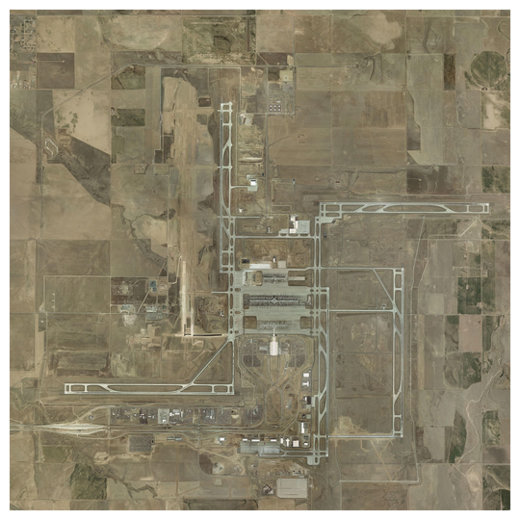 Visitors are greeted by a massive statue of a horse bucking on its hind legs with glowing red eyes.

To add to the creepiness, the statue – titled Blue Mustang – killed its sculptor Luis Jimenez in 2006, when it fell on him and severed an artery in his leg.

Inside the terminal, the unsettling iconography continues. A gargoyle pops out of a suitcase at baggage claim and a mysterious plaque states that the airport was paid for by the “New World Airport Commission” – which doesn’t exist.

But strange murals by Leo Tanguma, which have since been removed, generated much of the interest from conspiracy theorists. 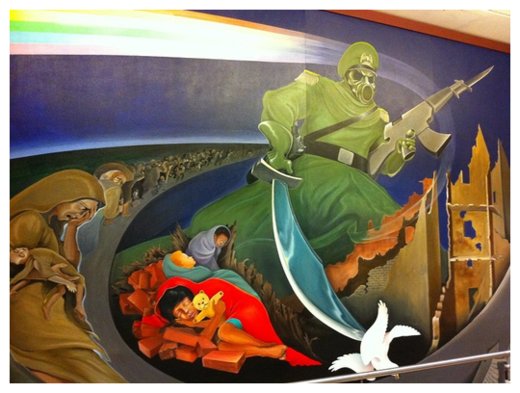 © Wikimedia Commons
Part of the mural ‘Peace and Harmony with Nature’.

The paintings show a figure resembling a Nazi Stormtrooper killing a dove, and distraught children standing over extinct animals while a city burns in the background. 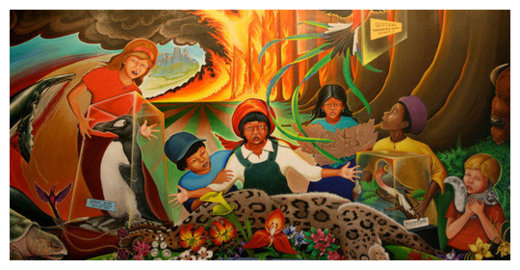 i/Flickr
A section of Leo Tanguma’s mural show children crying as a city burns in the background.

Another painting shows children handing weapons to a boy in lederhosen, who destroys them with a giant hammer. 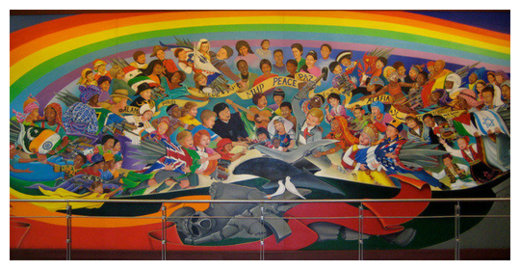 © Kari/Flickr
The last painting shows children handing weapons to a German boy, who destroys them.

With titles like Children of the World Dream of Peace, the artist has claimed the works represent the triumph of peace over all – but that didn’t stop people from seeing something more sinister.

“You’re in the largest airport of America, in the middle of the USA, and this is the mural we display. America joyfully submitting to Germany,” wrote conspiracy website Vigilant Citzen.

It claims these murals depict the massive depopulation of the Earth, the death of Judeo-Christian beliefs, One World government and restoration of nature.

So what’s the point of all of this? Some believe the airport contains a large underground bunker, with connecting tunnels, and will eventually be used to control the population.

“This gigantic structure will eventually become much more than a regular commercial airport,” Vigilant Citizen continues.

“It has the capacity to handle a huge amount of people and vehicles, leading observers to think that the structure might be used as military base and others even add that it will be used as a civilian concentration camp in the near future.”

“You name a conspiracy theory and somehow we seem to be connected to it,” he said.

“I can’t give a tour in the airport without at least one person attaching themselves to the tour and starting to ask questions about it.

“There’s not [any] evidence you can provide, there are no assurances you can give that the conspiracy theory is wrong, because … obviously it’s going to be a cover-up or brainwashing or chips installed in brains.”