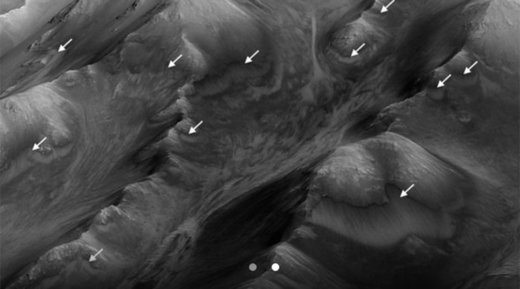 Recurring slope linae, dark streaks that change seasonally, on Martian slopes indicate presence of flowing water, according to a new study of thousands of such features in the red planet’s largest canyon system.

The study investigated these warm-season features in the Valles Marineris region near Mars’ equator.

Some of the sites displaying the seasonal flows are canyon ridges and isolated peaks, ground shapes that make it hard to explain the streaks as resulting from underground water directly reaching the surface.

It is highly unlikely that shallow ground ice would be present as a source for seasonal melting, given the warm temperatures in the equatorial canyons, researchers said.

Water pulled from the atmosphere by salts or mechanisms with no flowing water involved remain possible explanations for the features at these sites.

These features are called recurring slope lineae (RSL). Since their discovery in 2011, Martian RSL have become one of the hottest topics in planetary exploration, the strongest evidence for any liquid water on the surface of modern Mars, even if transient.

“The occurrence of recurring slope lineae in these canyons is much more widespread than previously recognised,” said Matthew Chojnacki from the University of Arizona.

They appear as dark lines extending downslope during a warm season, then fading away during colder parts of the year, then repeating the progression in a following year.

Water, in the form of hydrated salts, was confirmed at some RSL sites last year, including in Valles Marineris.

Researchers reported detailed observation of 41 RSL sites in central and eastern portions of Valles Marineris, the largest canyon system in the solar system.

Each site is defined as the size of a single image from the High Resolution Imaging Science Experiment (HiRISE) camera on NASA’s Mars Reconnaissance Orbiter: about 5.4 by 12 kilometres. The number of individual flows in each site ranges from a few to more than 1,000.

“As far as we can tell, this is the densest population of them on the planet, so if they are indeed associated with contemporary aqueous activity, that makes this canyon system an even more interesting area than it is just from the spectacular geology alone,” said Chojnacki.

The possibility of liquid water at or near the surface of Mars carries major ramifications for studying whether life exists on Mars, since all known life relies on liquid water.

Either liquid or frozen water near the surface could become an important resource for humans on Mars.

Fresh crater impacts and other data have unveiled water ice close to the surface at many locations in middle and high latitudes of Mars.