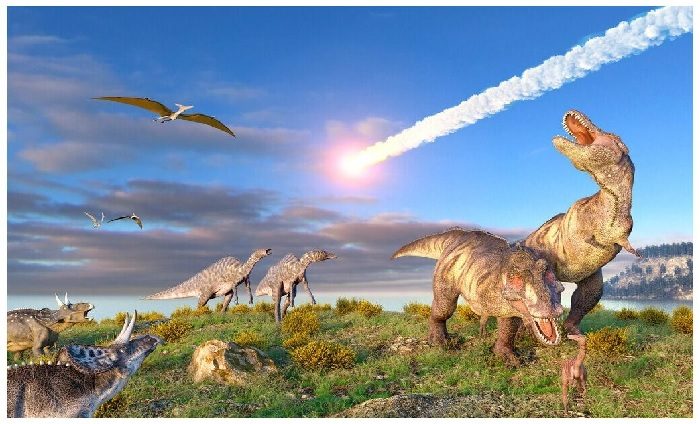 This theory add into the mix another danger on our list of things that could bring about planetary extinction as long-period comets do happen [pass] in our time as well.

By Becky Ferreira
via The New York Times

A new study blames a comet fragment for the death of the dinosaurs 66 million years ago. But most experts maintain that an asteroid caused this cataclysmic event.

In one searing apocalyptic moment 66 million years ago, Earth was transformed from a lush haven into a nightmare world with a fiery wound that bled soot into the skies. The extraterrestrial object that slammed into our planet spelled doom for dinosaurs and countless other species, even as its fallout opened new niches to our mammal ancestors.

For decades, scientists have debated the identity of the impactor that struck our planet that fateful day, leaving a 90-mile scar called the Chicxulub crater under what is now the Yucatán Peninsula in Mexico.

Although an asteroid remains the leading candidate, a team based at the Center for Astrophysics, in Cambridge, Mass., has proposed that the culprit may have been an icy comet that flew too close to the sun.

When long-period comets from the outer reaches of the solar system approach the sun, they can be torn asunder by the star’s immense tidal forces. The resulting shards may have been catapulted across Earth’s orbit, providing “a satisfactory explanation for the origin of the impactor” that killed the dinosaurs, according to a study published on Monday in Scientific Reports.

“To this day, the origin of the Chicxulub impactor remains an open question,” said Amir Siraj, an undergraduate studying astrophysics at Harvard who led the research. His model, he said, examines “this special population of comets” that could have produced enough shards — of the right size, at the right rate and on the right trajectories — to threaten Earth “in a way that’s consistent with current observational constraints.”

Other experts disagreed with the study’s methods and conclusions. “I believe their work has several intrinsic problems that work against their hypothesis,” said Bill Bottke, a planetary scientist at the Southwest Research Institute in Boulder, Colo.

From the perspective of Mr. Siraj and his co-author, the Harvard theoretical physicist Avi Loeb, a cometary origin fills some of the gaps in our understanding of this ancient cataclysm, which prompted the so-called KT extinction event, signifying the end of the Cretaceous period and the start of the Tertiary.

The researchers cite evidence that the impactor was composed of carbonaceous chondrites, a rocky material found in a class of primitive asteroids that date to the birth of the solar system. Samples returned from Comet Wild 2 in 2006 revealed evidence that the icy world has a similar composition, suggesting that this makeup “could potentially be widespread in comets,” the researchers note in the study. The team speculates that the Vredefort crater, in South Africa, and the Zhamanshin crater, in Kazakhstan, may also be remnants of cometary impacts.

“The fact that long-period comets are likely to be made of the material — carbonaceous chondrites — that is deep in these craters is in support of our model,” Dr. Loeb said.

The researchers argue that factoring sun-splintered comets into impact models increases the rate of hazardous Chicxulub-scale objects by an order of magnitude, increasing the odds that Earth was struck by a comet fragment 66 million years ago.

Natalia Artemieva, a senior scientist at the Planetary Science Institute in Tucson, Ariz., dismissed this cometary-origin hypothesis. The four-mile-wide comet fragments envisioned by the study would have been too small to create the Chicxulub crater, she said. She noted the telltale spike of iridium that was deposited in the aftermath of the impact and that is visible in geological strata all around the world.

“The projectile size should be consistent not only with the crater size but also with the global amount of iridium,” Dr. Artemieva explained in an email. “This is certainly the case in the standard (stony asteroid) scenario, but not for a tiny cometary impact.”

Dr. Bottke raised multiple concerns with the study. For instance, he said, its model overestimates how frequently long-period comets would be pulled apart by the sun and how many dangerous fragments such encounters would produce.

Although Dr. Bottke remains unconvinced that the impactor had a cometary origin, he noted that the asteroid explanation also raised many exciting and unresolved questions.

“The evidence we have for the KT impactor is more suggestive of asteroids than comets, but it’s not conclusive,” Dr. Bottke said. “There’s still wiggle room if somebody really wants it to be a comet. I just think making that case is really hard.”

Mr. Siraj and Dr. Loeb are not the only scientists stoking visions of dinosaur-killing comets. Two geoscientists, Mukul Sharma of Dartmouth College and Jason Moore of the University of New Mexico, have also advanced a cometary origin hypothesis for the impactor.

“Assuming that the modeling is correct, this paper provides independent evidence of our assertion in 2013 that a comet (high speed, small) and not an asteroid (slow, large) impacted 66 million years ago,” Dr. Sharma wrote in an email. “Our assertion was based on geochemical and geophysical evidence, and so it is exciting to see this new research based on modeling of cometary/asteroidal motions.”

“As a scientist, it is really important to keep re-evaluating your hypotheses,” Dr. Moore said, adding that if the new paper withstands “the scrutiny of the community as a whole, it would provide another incentive to revisit other existing data sources and models with a cometary candidate in mind.”

Mr. Siraj and Dr. Loeb said that future samples returned from comets might shed more light on their hypothesis. Sophisticated telescopes, such as that of the Vera C. Rubin Observatory, will also help scientists build a more comprehensive catalog of comets, asteroids and other near-Earth objects.

These advances will constrain theories about the source of the object that wiped out the dinosaurs, and perhaps help humanity escape the same fate.

“Ultimately, the more we look to nature, the closer we can get to answering fundamental questions about the world around us — about the past, but also about the future,” Mr. Siraj said. “That’s the beauty of science.”