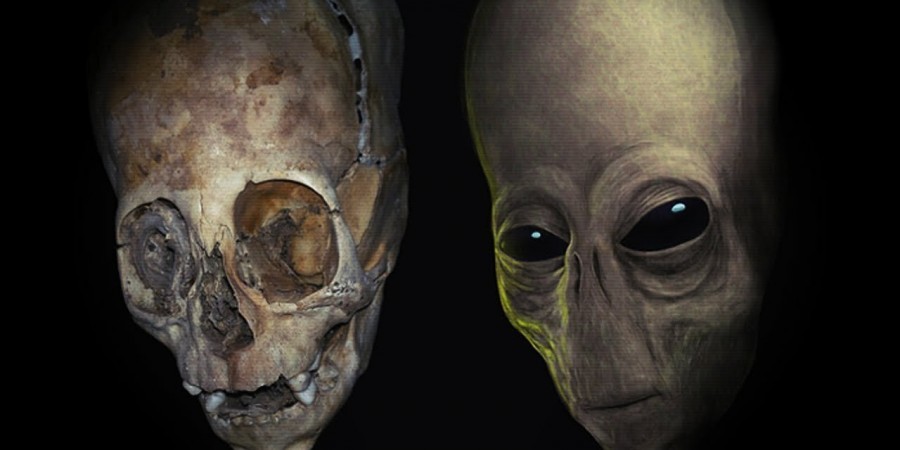 The researchers proved that Paracas Skulls from Peru could be of alien origin. The results of a DNA analysis proved this.

Researchers believe that the skulls are significantly different from any known to man and could only be the result of interbreeding between alien species and humans.

There have always been suggestions that alien species influenced the ancient civilizations, such as those in south America or the Pharaohs of Egypt.

The Paracas skulls are considered to belong to a hybrid race of super-humans known as the Nephilim. The Bible refers to ‘Fallen Angels’ and the birth of the ‘Nephilim’ and their descendants who became immortal.

Tello discovered a massive and complex graveyard containing tombs, buried under the sand and rocks of the desert in 1928.

In these tombs Tello found some of the most controversial human(?) remains in history. The bodies had the largest elongated skulls in the world and have since been called the Paracas skulls. Tello found a total of more than 300 skulls and they have been dated at around 3,000 years old. A recent DNA analysis performed on some of these skulls has presented amazing results that could challenge the current perspective of the human evolutionary tree.

The Paracas skulls are different however. Since their craniums are 25% larger and 60% heavier than regular human skulls, researchers strongly believe that they couldn’t have been modified through binding. They are also structurally different and only have one parietal plate as opposed to the two normally found in human skulls. These differences have deepened the decade-old mystery around the Paracas skulls and researchers haven’t been able to explain their origins.The director of the Paracas History Museum has sent samples from 5 skulls to undergo genetic testing. The samples consisted of hair, skin, teeth and fragments of skull bones. The genetic laboratory was not informed about the samples’ origins in order to avoid biased or influenced results. The results were fascinating.

The mitochondrial DNA (inherited from the mother) presented mutations unknown to any man, primate or any other animal. The mutations suggested we are dealing with a completely new human-like being, very distant from Homo sapiens, Neanderthals or Denisovans. The Paracas individuals were so biologically different from humans they wouldn’t have been able to interbreed. “I am not sure it will even fit into the known evolutionary tree”, one geneticist added.

This breakthrough brings up more questions than it answers but counts as another piece of evidence suggesting that we are not alone.